We Bought a Tree

Good Morning. The Garden Spot is awash with sunlight, all clean and pretty after sweet rain. One of Mother's miracles is her ability to bring the green to the landscape after a long, cold, dull brown winter. The locusts trees at the back o the house are leafing out and soon the little migrating warblers will be picking them for bugs.

Inside it has been a little more bleak for me. I came down with the worst cold that I have had in years. Not one to get sick often, this one has been a doosey. I am on the mend this morning, so I thought I would share the only two photos that I took last week. The Head Gardener and I went tree shopping. 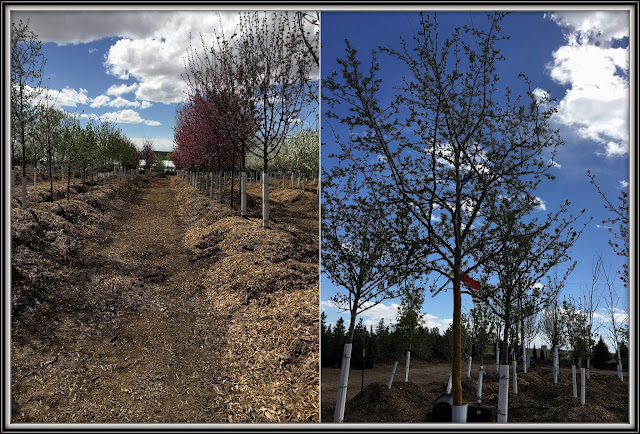 It's hard to choose when you have such huge choice of trees: row after row after row. Some leafed out, some blooming, some in full color. While not a very good photo, we had decided before we went shopping which tree we wanted, a Russian Hawthorn that will have a nice rounded shape, white flowers, and red berries. We chose this one to offset all of the pine trees on the property and to attract the beautiful masked Cedar Waxwings. The HG has yet to plant it, so when he does, I'll take better photos. That's my tree there with the red "Sold" tag. I love it already.

Thanks for joining me today. I'll be joining Mosaic Monday.


This has got to be my favorite time of year. The Garden Spot looks so lovely with wearing its spring colors. Crab apple trees are lush with bloom this year and the bulbs are so fresh and springy. I do wish that they would last longer--like all summer. 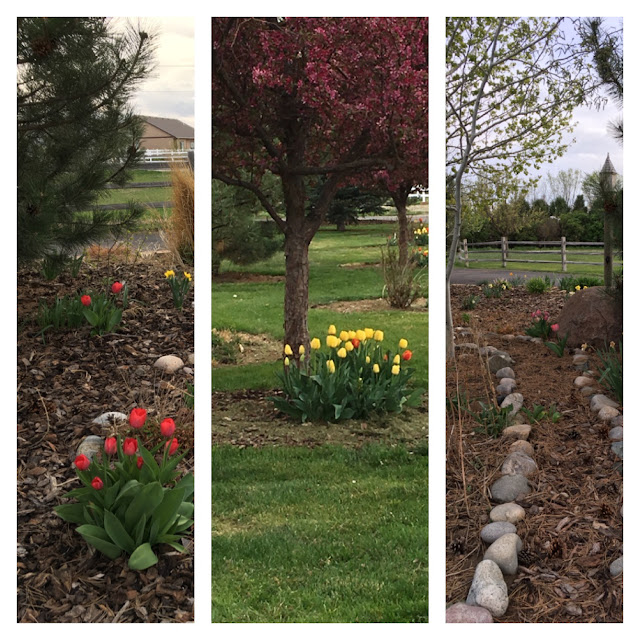 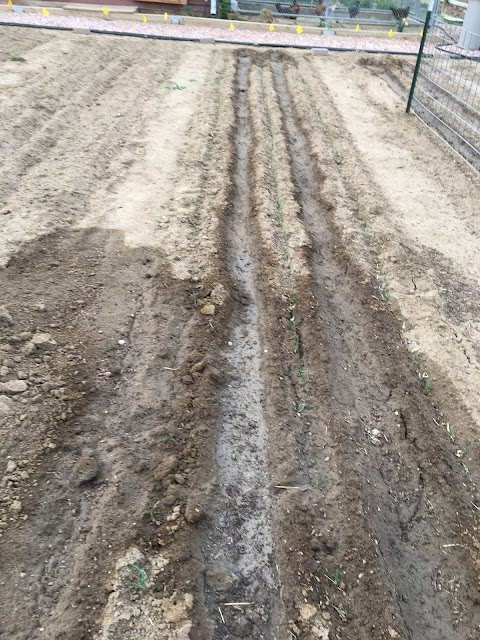 In the vegetable garden, the peas and onions have sprouted. I should have retaken my photos to show how big they are now. Next week.

These rows are the potatoes, but it looks like more weeds are sprouting than potatoes. 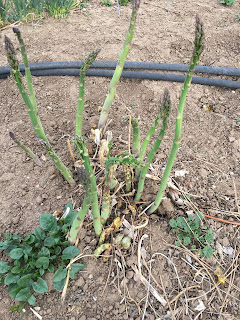 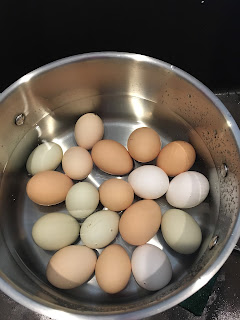 The asparagus plants are beginning to actually produce enough spears for a meal. This clump I think is now four years old. I had to take a photo of the eggs that I was boiling for deviled eggs. Who needs the Easter Bunny to deliver colored eggs when we have Easter Hens? I boiled these the old fashioned way to devil the eggs, but if you watch the TV show mid-day The Chew they showed a great way of making deviled eggs:

I was so impressed with the way to make deviled eggs. No peeling eggs that don't want to turn loose of their shell. I'll let you know how it works. 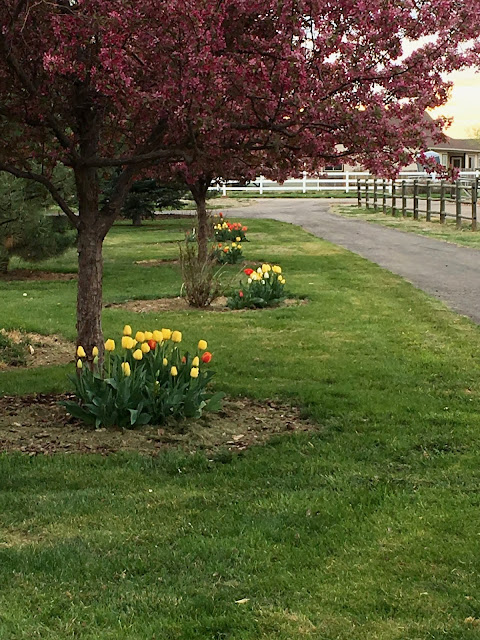 A parting shot of the drive way. Soon the tulips will fade and the blooms on the trees will fall, I will enjoy the color and the green grass as long as I can before the heat of the summer takes over.

So glad that you dropped by.

If you like, visit Ann's Dollhouse Dreams to see my latest project for Nathan.

I loved Maggie's description of a beautiful spring day in Normandy. Paradise. While we are not yet wearing flip flops here--well some are--, the days have been sunny and a bit coolish, but we know that spring is on the way 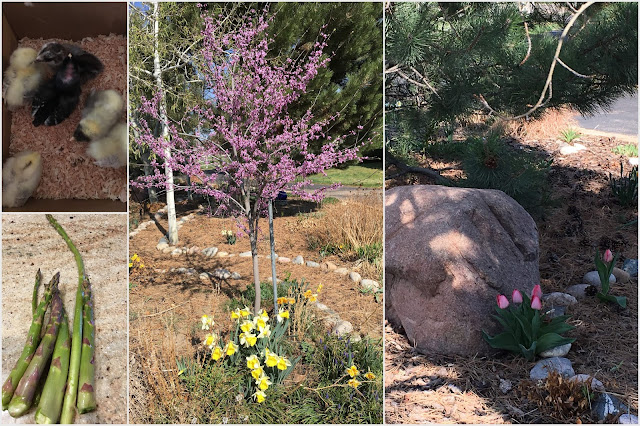 Four new baby chicks arrive.  Two Delawares, a cuckoo maran, and a dark Brahma. They are so cute. Right now they live in the Rubber Maid tub serving as a brooder with their heat lamp to keep them warm. I' will be taking their baby pictures in a few days for next week's post.

There is fresh asparagus in the garden ready to picked. I missed going out today. It could be two feet tall by now tomorrow. Asparagus grows very rapidly.

The Eastern Red Bud reaches full bloom, a delight for sure with daffodils dancing at her feet. Love it.

The red tulips bloom. These red flowers were planted by previous gardeners here and they great us each year.

Yes, it is spring.

Other moments of note for the week: 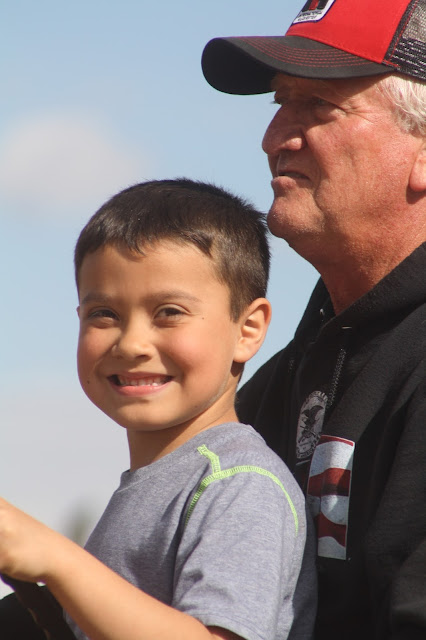 Pop the Pony had surgery in a rather delicate place to have a tumor removed. The vet sent the tissue  in to be tested to see if is cancer. If so, he will receive a dose of chemotherapy that will slow the growth of the cancer. He is twenty-eight, feels good and still has a good attitude.

And that is how you know that is Spring

Thanks for visiting.
Linking with Maggie at Normandy Life for Mosaic Monday.

Dream A Little--or A Lot

The Head Gardener came home one day some time last year and announced that he had purchased a tractor. "What another one? Seriously? We are retired. We can't be spending money like that," I loudly protested.

Days later he came in the house after working on his tractor, declaring that he had wanted this specific tractor since he as a boy, 1965 Case Tractor. His dad farmed with Case tractors, perhaps even this model. So how was I to protest? In fact, t my cold heart melted as I saw the joy, pride, and satisfaction on his face.

Dreams to come true. Last week we had the grandsons, Jacob is now fourteen, the moody, pensive, funny, sweet, charming teen-aged boy, and Nathan who will be eight next week, cheerful, interested in so many things, knows about a lot of stuff, he says. And he does.

So on Thursday, Grandpa took his tractor to small field now owned by a Denver suburb and farmed by a family friend and sank his plow in rich loam. For him it was a moment because it was a piece of ground once a part of his family farm. Perhaps more importantly, he was able to share his moment with his grandsons, each getting to take turns "plowing." I asked the oldest if he wanted another turn and he asked, "Why would I?" I replied, "Because you will never get to do this again."  I think that point was lost on the youngster, but he smiled and said, "Yes."

And finally, the the HG found the plow out in a field somewhere destined for the salvage yard where it would have been recycled. 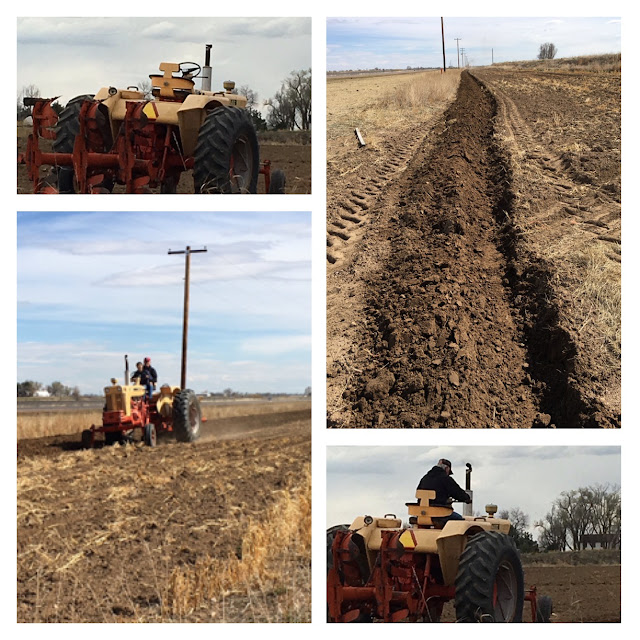 We did other things with the boys, including a trip to the city to the Denver Museum of Nature and Science. The place was packed with people--Spring Break for Denver. Nathan loved it; his favorite was the Egyptian exhibit. 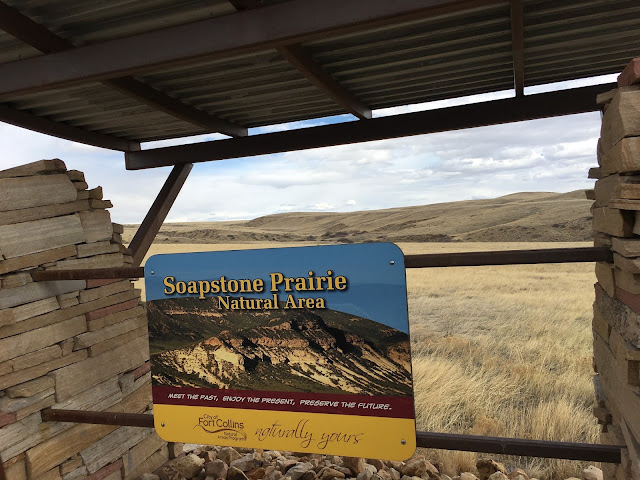 We also took a drive north to the Prairie, a part of the grasslands that I have never been to. The Soapstone Prairie Natural Area is the location of a major dig of a fire pit of pre-Indian culture on the plains dating back to 10,600-10, 720 B.P. We had hoped to visit the Lindenmeir dig site, but we are not sure that it is open to the public.  Here is the Wikipedia link if you want more information:https://en.wikipedia.org/wiki/Lindenmeier_Site. It is very interesting to see the artifacts that were discovered. It was a major discovery or pre-Indian civilization. 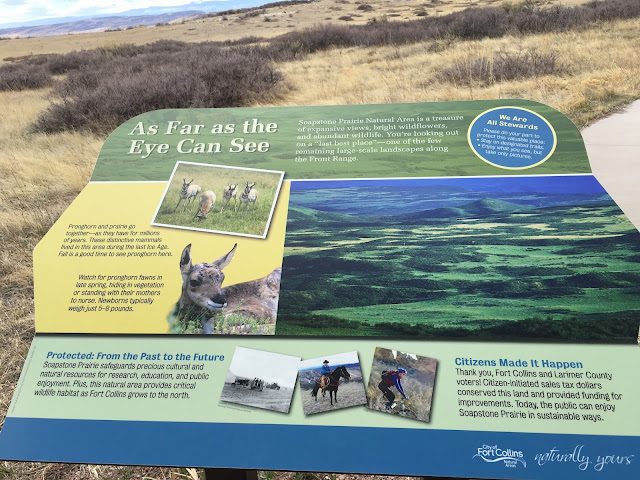 Yes, as far as the eye can see, but look to the east and you will see the Rawhide power plant and more civilization. 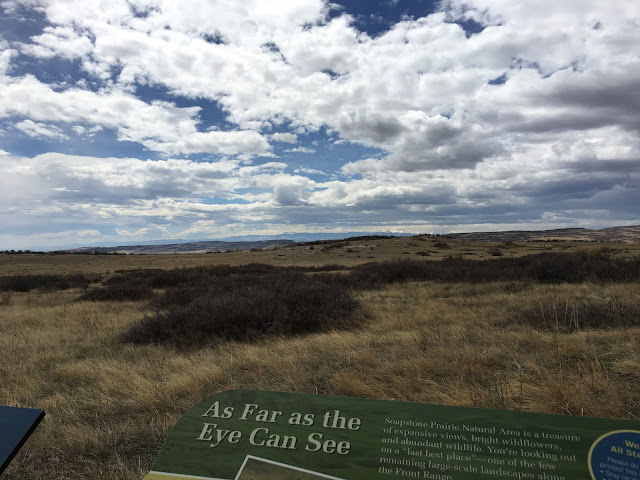 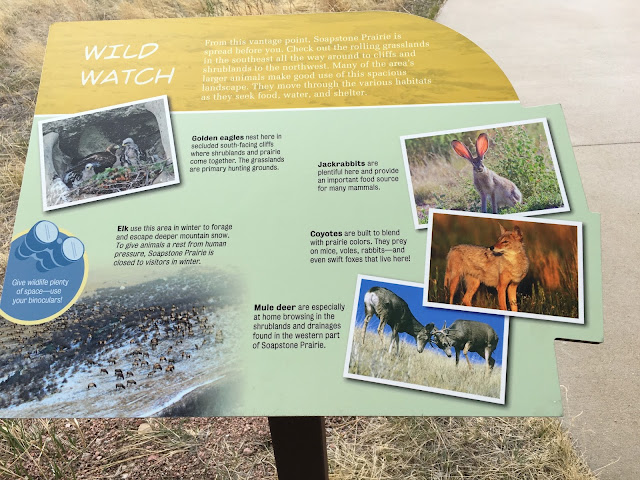 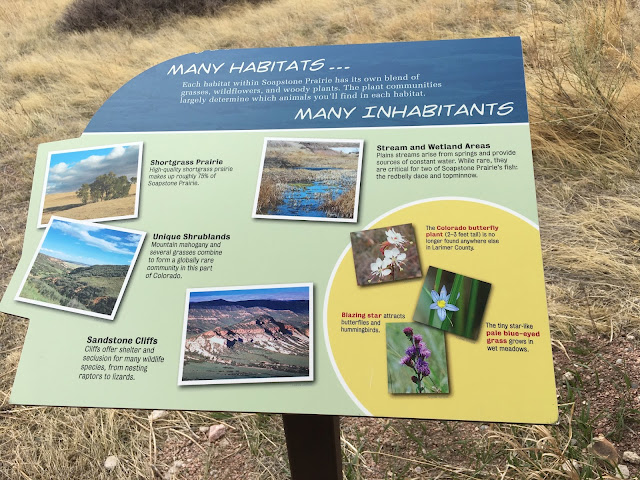 If you visit northern Colorado, plan a trip to the prairie where there are bike trails, walking trails, bird sanctuaries, and lots of wildlife to see. This park has a herd of free ranging buffalo--well, they are fenced in, along with Prong horned antelope and a variety of birds. Most often Colorado visitors are quite familiar with the ski areas and mountain resorts, but the prairie, especially in the spring, is a wonderfully quiet and human free zone to visit.

We have had rain. Finally. Today the sun shines, but it is chilly. Snow on the way tomorrow. After a busy week with the boys, I am looking forward to the quiet of the house.

Wishing you a fabulous week. Thanks so much for stopping by.

Linking with Maggie at Normandy Life for Mosaic Monday.