Back to the Neighborhood

Hello Friends, I have returned. I had not planned on a blog break, but it happened. I ran out of things to say and there didn't seem anything new or interesting to write about. I posted my very first post 5 August 2010. We had been here at the Garden Spot for just a little over year and there was a lot of gardening to write about. It took a long time to build up a nice list of wonderful loyal readers whom I began to consider as friends. We have shared so much over the years, but then some of the bloggers have dropped away, going to Instagram, and I still have not made that move.

Blogging is hard work and time consuming. I was having a hard time coming up new and fresh ideas, but Picasa failed me because I have so many thousands of photos in my iPhoto library and with the sharing, they are all on my all of my devices. I took all of the years of photos off of my iMac hoping that they would disappear from the iPad, phone, and laptop--I am little technology heavy. Picasa does not store photos, as you probably know, it merely imports what is already on your drive and with nearly 18,000 photos on my lap top, Picasa bogged down and I said, "I'm done" so I delete Picasa from both of my computers leaving me without a decent collage maker. Yes, I know that there are others out there that I can use, but I want free!

Beginning to feel guilty because I have been gone for so long, I decided to get back to work--writing the blog. I used my iPad's collage app and made up a mosaic for Monday Mosaic, and I am back in business. Nor have I stopped writing. I have been using my writing time and more to write fiction. I started my first novel just before Christmas and the story didn't end with the last line of the novel. So I wrote a second, and now I am finishing up the trilogy. What will I do with my masterpieces?  I don't know yet, but it has been a life long dream to write a novel. When I worked--teaching college students how to write a decent academic essay--I didn't have time to do my own writing. So now I do. My friend is also writing children's fiction and we daydream of the possibilities of publishing and I said, You know what? At our age, what do have to lose?  Our lively hood no longer depends on the success of our writing. We can write to please our inner need to tell stories and if we get published, well that is just the icing on life's cupcake. 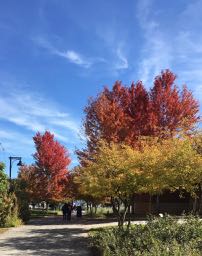 I am still tutoring  at UNC in the Writing Center, helping the college students with their writing concerns and visiting with my friends. I tutor two hours on Tuesday morning. 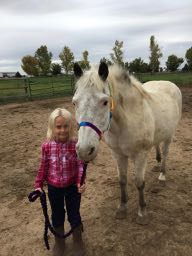 Lily and POP: Lily is now five and in kindergarten two and half days a week. She goes to school on Tuesday and Thursday and half a day on Friday, so on Wednesday she and mother come here to work their horses. 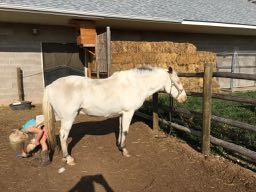 On of Lily's favorite parts about working with POP is picking out his hooves. We play with the horses  and have lunch and sometimes go down the road to the new recreational center and swim. 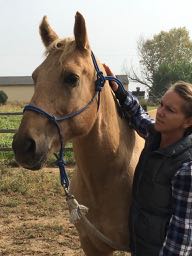 Jennifer works Sundance, but has discovered the cause of his limp that he has had for some time. I thought he had injured his shoulder slipping in the mud, but the vet has diagnosed him with arthritis in the joint just above his hoof line, so he is on medication for the inflammation. It has helped some, but she isn't sure if she will be able to ride him. 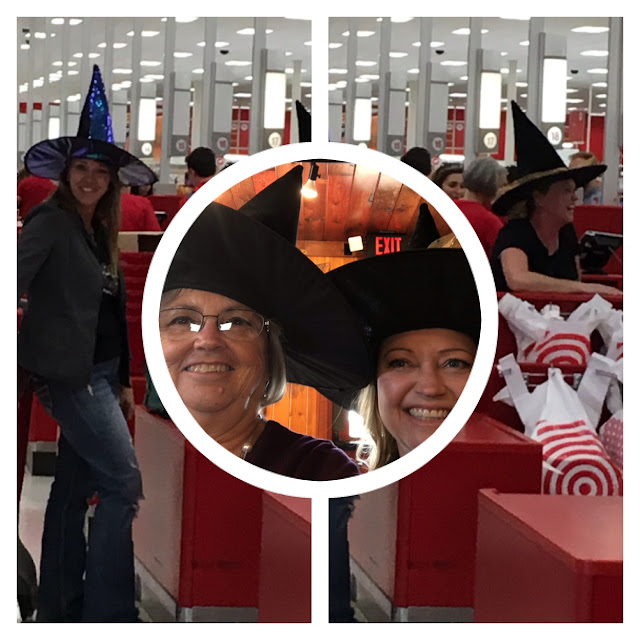 Tomorrow is Halloween and we get really crazy. We all have with witch's hats, so we went to our DAR (Daughters of the American Revolution) meeting wearing our hates. We get smiles and comments, but wonder what the ladies are really thinking. Heather lives in Denver so when these two sisters get together and we all go to Target--well you can see why I disassociate myself with them. And these photos are tame. 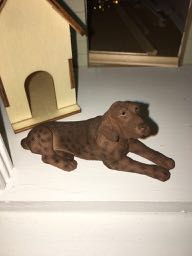 For those of you who follow the dollhouse blog, I have a dog for the house, a German Short Haired Pointer, same color as our Boone. 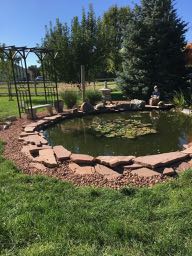 The Head Gardner finished some landscaping around the water garden. We had extra red rock, so he put it around the pond to give a nice clean look. The weeds will pop up next year--we take on the battle sometime later. 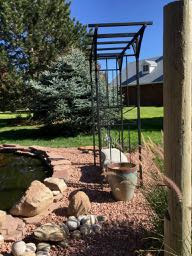 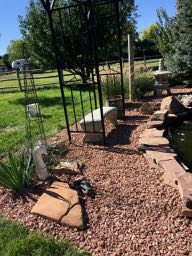 Next year I may hang pots on the trellis. 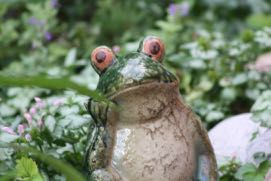 You have all seen this froggy who dreams pond side in the front courtyard. But you have not  met this handsome dude. In the middle of the night I heard a bull frog, most certainly. I grew up listening to the bull frogs. I'll share some bull frog stories later--remind me if I forget. 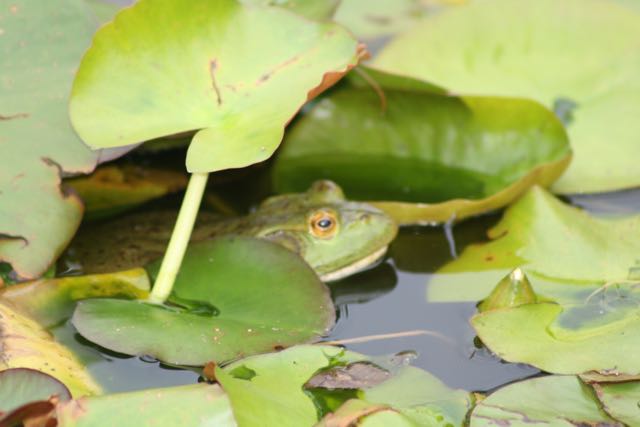 He is not a large frog. We don't know where he came from. Did a bird carry a frog egg in and deposit it and he has been there all along? Or did he hop in, traveling a long distance to find a home? We do know that he will move on probably because the pond is lined with heavy plastic and he will need to burrow in to hibernate. I enjoyed his song while he was here. 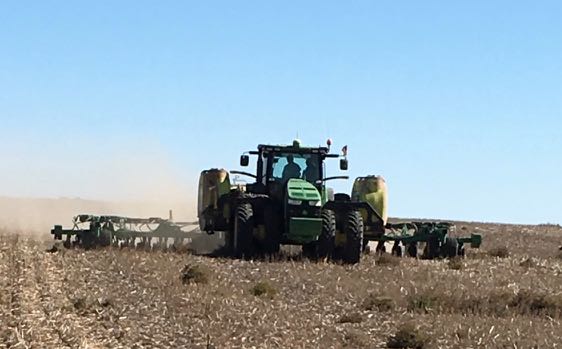 We took a drive out to our friend's wheat from in Northeastern Colorado. He is planting the last of the winter wheat. Now the Head Gardener is helping the Anderson Brothers pick up bird seed--millet. We have a skiff of snow today. I hope it is dry out there so that they can be done and he can come home Wednesday

My last three photos were taken by my granddaughter, Elinore, who, by the way, is 11 today. She will soon be taller than I am. I let her take my Cannon Rebel around the Garden Spot and these are among my favorites 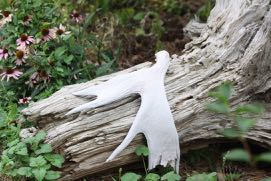 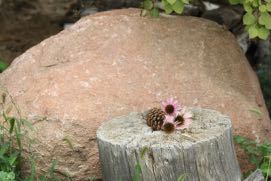 She has a good eye and nice sense of composition.

So, there you have it friends. I'll be around to visit. It's nice to be back in the neighborhood.

Of course I am linking with Maggie at Normandy Life for Mosaic Monday.