So Many Things to be Thankful For

The count down to the big feast has begun in our house. We all know here in the States the importance of the feast: The Count Down to Black Friday Follows. 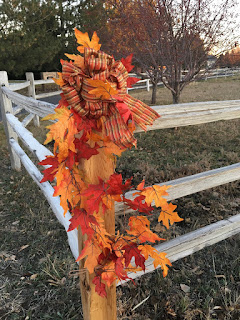 Not even heere are our house, anyway. It's the best day of the year to stay home. I'm not a big shopper and even if I were, I don't like crowds, so I'll wait until the urge to shop hits me, naturally, willingly, and I'll probably do a lot on line, too. And you?

I've been doing more genealogy research and have found that I may have another Revolutionary War descendent, my 9th generation great grandfather and either his son or his brother who fought also--hard to tell which one since they share the same name. I find that discovery very exciting. As I do my research, I read the stories that some researchers provide detailing what the ancestors did. Many of them were involved in their local governments, helping to build communities, states, and finally our great country. So for them I am Thankful. As a descendant of John Howland and his wife Elizabeth Tilley who came on the Mayflower, I am especially in thankful of their decision to get on that little wooden ship to travel to a new, unknown world to begin their life without any of the conveniences of their time. How brave they were.

We live a blessed life here at the Garden Spot with much to be thankful for. Most of the time life just hums along, but sometimes we get caught off guard, especially with our animals when we have to call for help.  We are most thankful for 3 amazing veterinarians, especially the one who saved our dear Pop's life. Jennifer's face reveals the stress and worry that we all faced a couple of weeks ago. 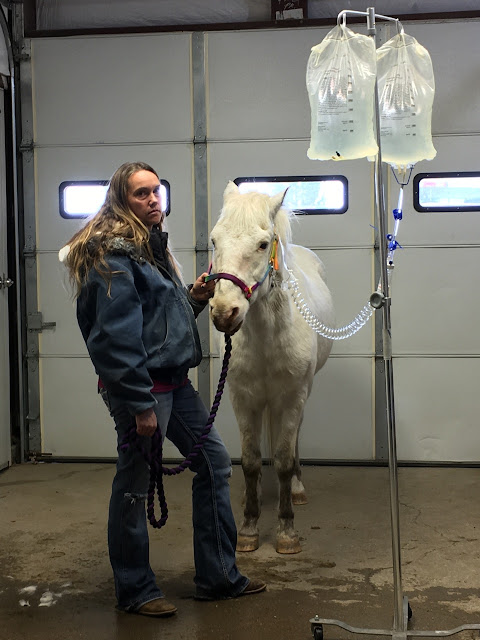 The Head Gardener was gone on a deer hunting trip. Jennifer came to the house to check on Sundance since he has a stubborn sinus infection that she has been treating. Since she was here, I didn't feed the boy; instead I left her in charge and left to tutor at the university, leaving the housekeeper to work her magic on the house. Half way to town, (a twenty minute drive), Jen called frantically telling me that Pop was choking. I had a full schedule of clients at the Writing Center and couldn't not show up so I couldn't turn around and go home, so I simply told her to call the vet.

Pop is 32 years old. He has lost most of his teeth and can't chew the grass or hay that he eats. Usually he just wads it up and spits it out instead of swallowing the wad of unchewed food. We suspect that he forgot to spit the grass that he had been eating earlier and the wad got stuck in his throat. The vet worked on him here at home for over an hour by inserting a small hose up his nose and into his esophagus to pump water in to dislodge the wad, but it didn't work.

I was working with my clients and she was dealing with this crisis alone. I am really thankful that my housekeeper was here because she stayed with Jennifer until the vet arrived. Jen also called her dad who was two hours away and he came home. By the time I was done with my 2 hours of tutoring, the decision had been made to trailer Pop to the vet clinic so that the vet could put a camera in to see what was stuck.

I met them all at the vet's and we spent the rest of the afternoon watching this team of amazing young women work to save our little guy's life. He was sedated, so he didn't feel much pain, some discomfort from the tubes being inserted through his very narrow nasal passage. The vet inserted a small claw that she used to pick away at the mass in his esophagus and finally got enough picked out tiny piece by piece to flush the rest away with water.

She finished by giving him an IV to replenish his electrolytes. Now he is very restricted. 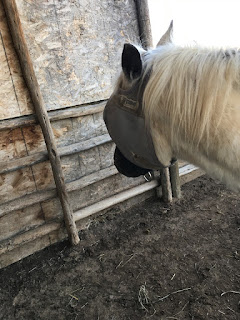 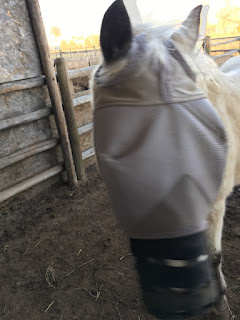 He can no longer graze or eat hay without wearing a muzzle that keeps him from getting any grass. He wears a hood to protect his eyes from the sun, and he has to be stalled at night so that he have the muzzle removed; otherwise, he would eat Sundance's hay and the grass through the fence. He's been on hay pellets for a long time, but now his pellets have to be wet down to form an easy to swallow mush.

Horses do choke and while they can still breath with the stuck food, it will kill them if they are not treated. So we are most grateful for a young woman who has now saved both of our big boys. Sundance had colic when we first moved him here and she came and saved him.

We drove to Denver yesterday to get the grandsons so that they could go deer hunting with the Head Gardener, but I got my time with them, too. A while back Nathan asked me if I could teach him to "yarn." He meant "crochet," so I tried, but he had a hard time. 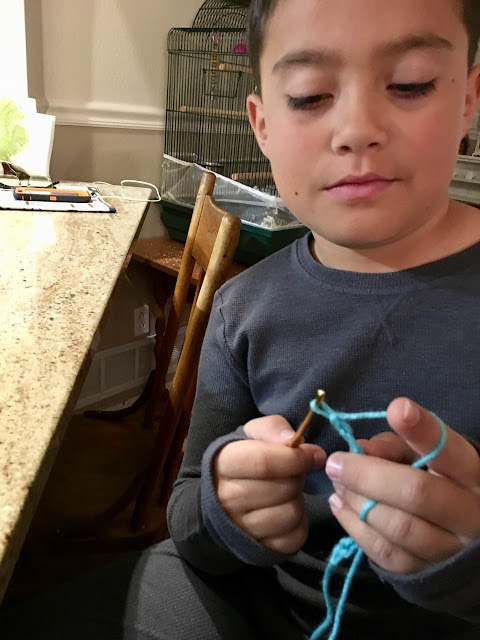 Now look at him. He wants to be able to his own fingerless gloves that I make for him. 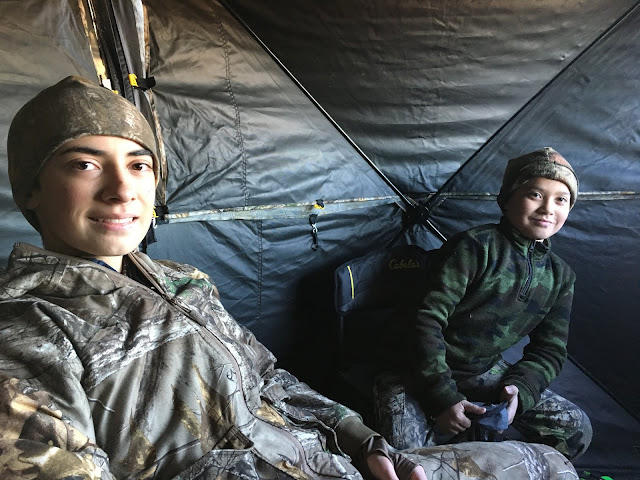 And here they are in the deer blind out in eastern Colorado. 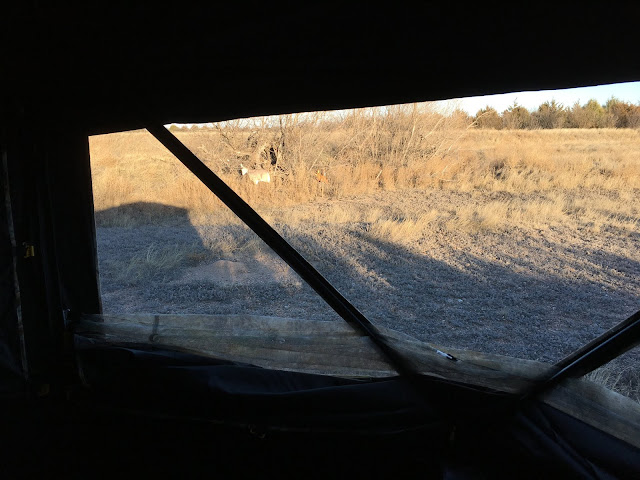 They have hopes that the decoy will attract a deer. 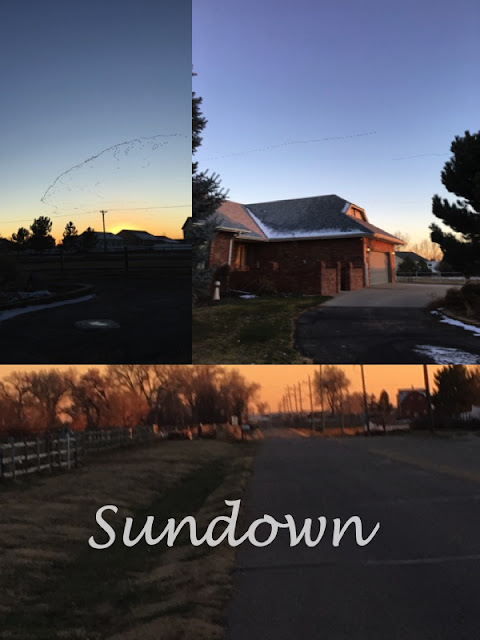 Do you hear them? Often you hear them before they appear: the Canada Geese that do their fly over every evening as they head for the corn fields for supper. There will be thousands upon thousands fly over, honking back and forth to each other, carrying on goose conversations. Sometimes they fly in the traditional perfect V while others groups prefer a straight line, or maybe just a bunch of geese. We like the sound of geese flying over.

Linking with Mosaic Monday. See you there.

Thanks so much visiting.

November begins the holiday season. The Christmas decorations begin to appear, it seems, far too soon. Sometimes we get so wrapped up in a holiday season that has become Open Season for shoppers that we forget to just enjoy the day, the moment.

Birthdays, for example, sometimes get lost in the specter of a holiday that happens on or just before the holiday. Take for example my birthday just five days before Christmas or my youngest daughter's birthday the day before Christmas or her daughter's birthday the day before Halloween. Today I honor my eldest granddaughter on her 12th birthday as we celebrated her birthday Saturday night. You have seen the posts on her blooming into a--a--tween, though her mind she is at least 18 all ready. She loves horses and rabbits and horses. Her sister added the large photo of her when I am guessing that she was 6, maybe, on our pony Pop. And now she has dreams of being a barrel racer, thus the the horse running for the barrels on her cake. 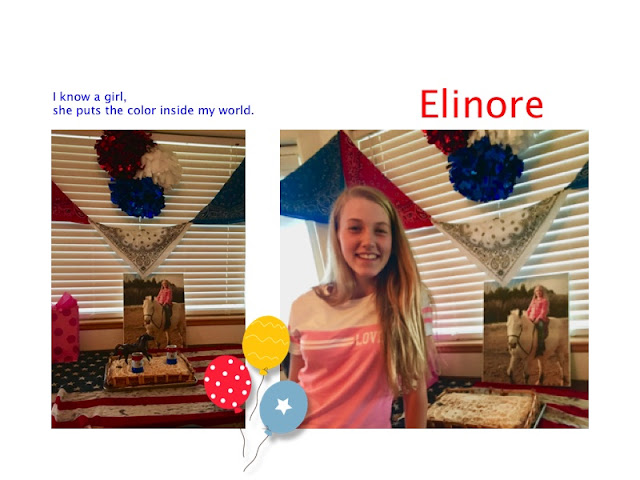 CBS Sunday Morning TV show did a story on a photographer who spends the falls photography the gorgeous fall colors of New England, one of my destination day dreams. I then took my camera out to take photos of our fall colors.

Mine are not nearly as spectacular as the New England landscape. As I wrote a few weeks ago, an early fall snow ruined our fall colors. 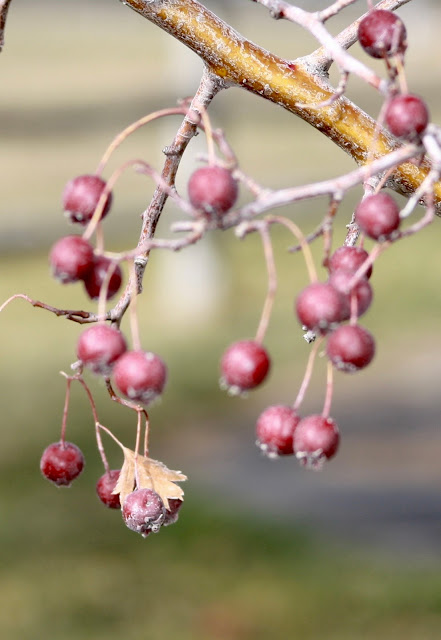 One leave clings to the hawthorn berries. We planted the tree hoping to attract cedar waxwings. No luck yet. 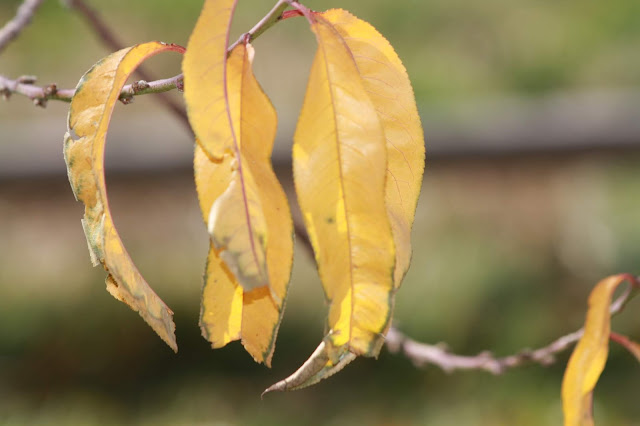 Clinging leaves to the peach tree. 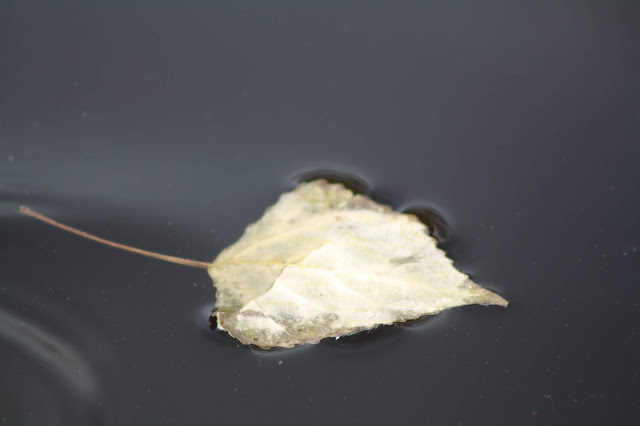 The neighbor's cottonwood leaves find their way to the koi pond. 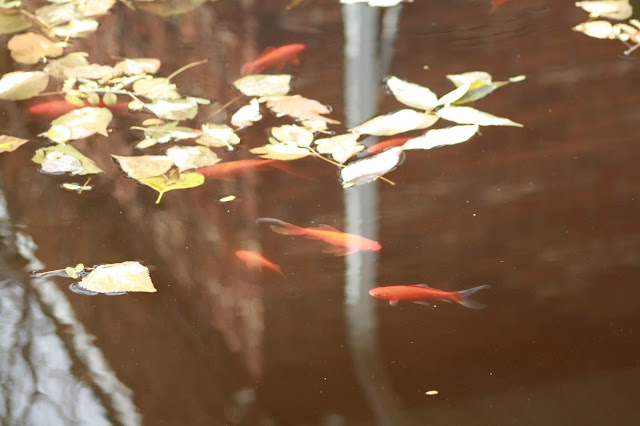 Really. We do have two koi and 75+ goldfish that swim amongst the ash tree leaves. 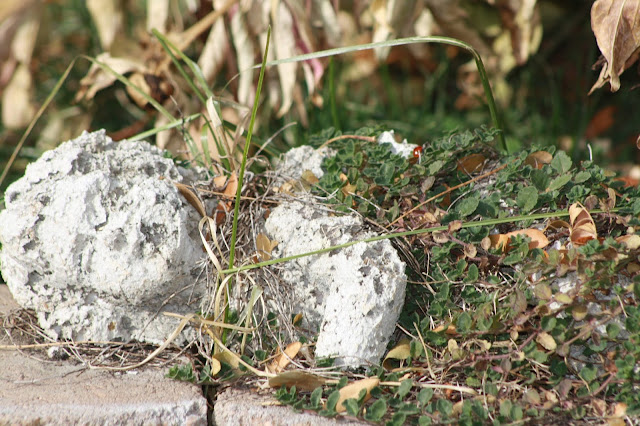 My sleeping cherub napping in the dried leaves. Do you see the lady bug? 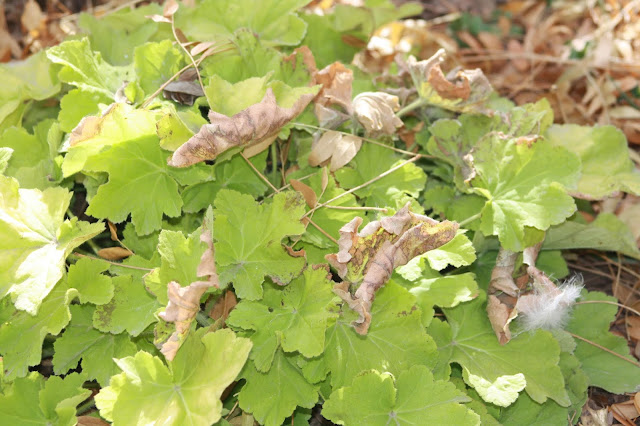 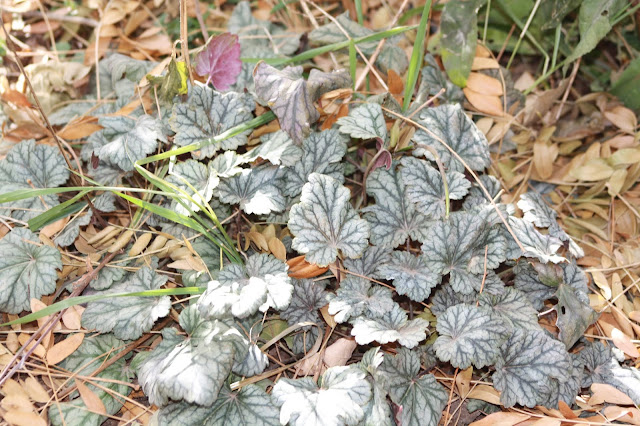 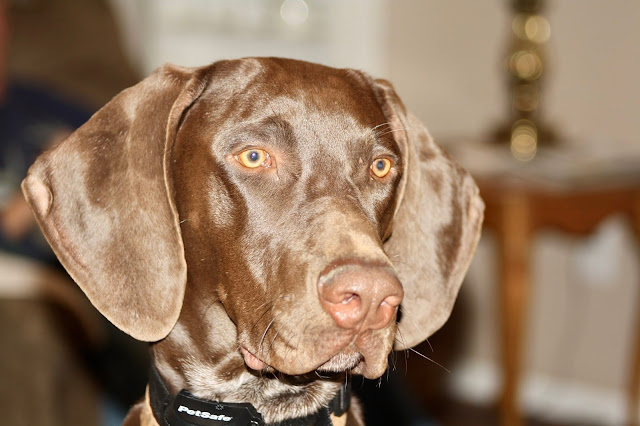 Our Brody Boy is growing. He is the first pet that I have been to get a good head shot of. He was fascinated by the camera's light to prevent red-eye. He's 7 months old now.

A big thank you to those who have hosted Mosaic Monday and now a thank you to Angie who has taken over the reins. I will invite you to join us at Ten Toes in the Water for Mosaic Monday, but then I think most of you have beaten me over there. I had intended to have my post done early this morning, but that didn't happen then this afternoon  Little Lily spent the afternoon.
at November 05, 2018 7 comments: