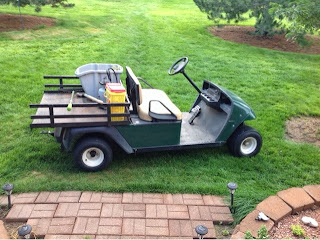 I am in a mood this morning. Actually it started yesterday, but really it has been all summer long as I have to face a sad reality here at the Garden Spot: The Weeds Are Out of Control. Seriously. The Head Gardener took me for ride on the EZGO yesterday eager to show me all the work that he had finished, but instead of seeing his accomplishments, I saw all the weeds.

And this was going to be the year that we conquered the weed. What was I thinking? Do we ever conquer them? They thrived in the drought last year. They have soaked up their share of our more than usually rainfall this year, They are a winning the battle. 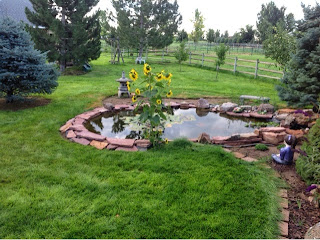 I even ventured out to the vegetable garden last night to see if there really was anything to pick.

I had to almost chop my way through the weeds to get to the vegetables. The garden is so sad that I'll not be showing any photos of it this year. But the thing about vegetables is how resilient they are. Give them rain and they grow despite the weeds because that is about all of the attention that the garden has received this year. While the lawn looks fabulous and the water garden is beginning to look awesome, other places at the Garden Spot have been neglected. 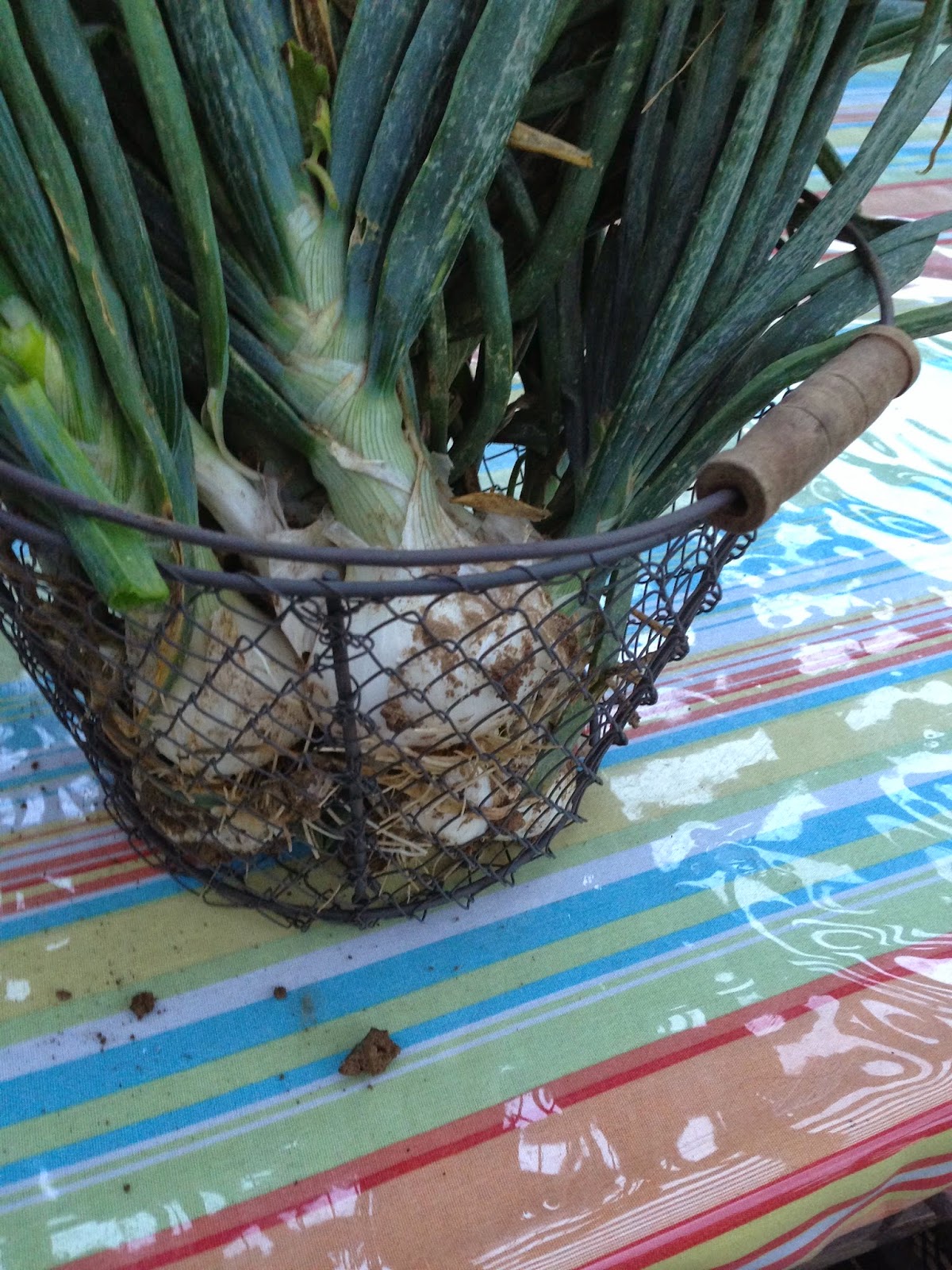 So, here is my onion harvest. Of the 3 rows and 3 varieties of onions planted, this is it. They just did not grow. They were planted next to the corral fence where the Head Gardener had treated the soil with an industrial weed pre-emergent two years ago. Nothing wants to grow there now. 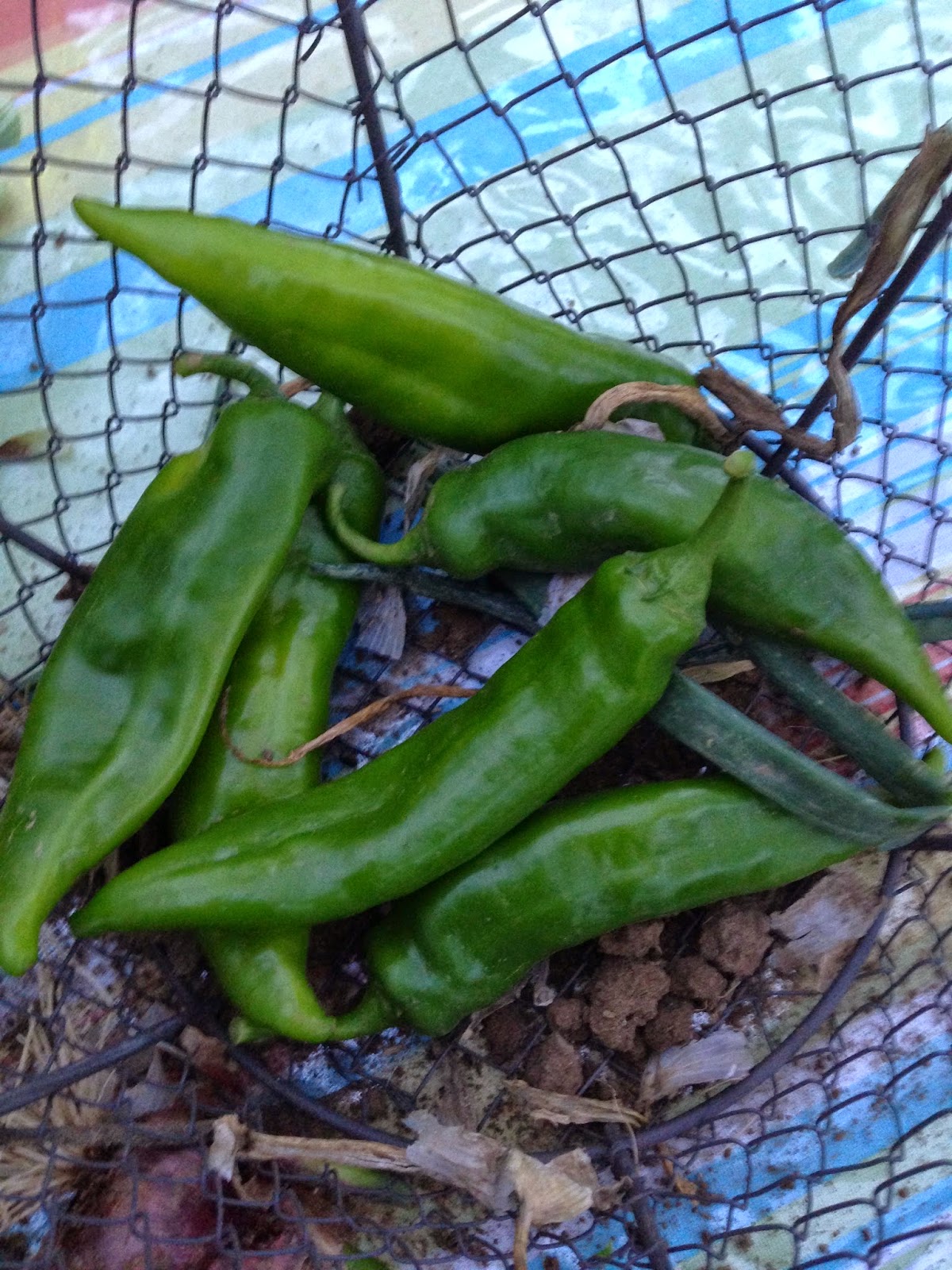 I will get an ample production of peppers. These are the Anaheim, a mild but still bitty pepper. I will have lots of green peppers, and jalapeños. The tomatoes are starting ripen. I picked a pan full, so I may get enough to make salsa.

The green beans which we have always had good luck growing fell to the bunnies who discovered the tender new shoots. I suppose we will have to install some chicken wire fencing next year to keep the bunnies out of the garden. We have 3 red beets growing and my husband pointed out the one carrot that survived his cultivation. He tends to forget get that seeds are underneath the soil when he cultivates his ditches for irrigation early before the seeds have a chance to germinate.

So while he is off to his two-day-a week job, I will be weeding the front circle yet again. It is really a really grim place. And this will be the last attempt for the season.

On a more cheerful note, meet my new friend. 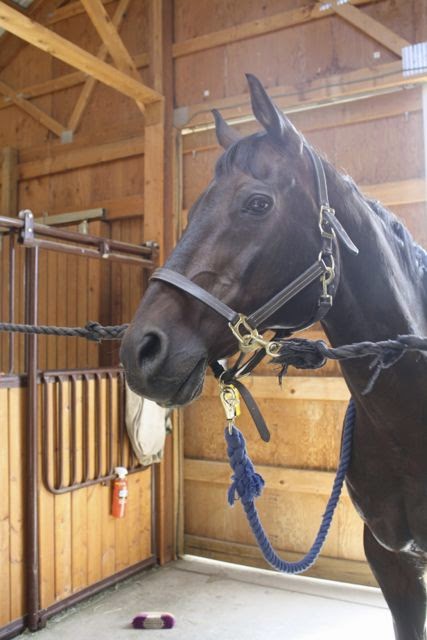 This is Bear. He belongs to my friend whose daughter is giving the girls riding lessons. Usually Mara comes to our house to give the girls their lesson on Pop, but Wednesday they were invited to her barn to ride her big guy Bear. At 24 he is now retired from show competition, but he still wants to be part of the action. 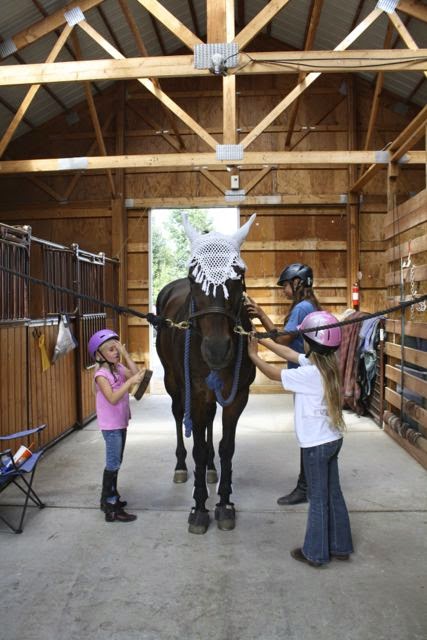 The girls help groom him before they ride. They can barely reach his shoulders. He wears his fancy lace to keep the flies off of his ears. 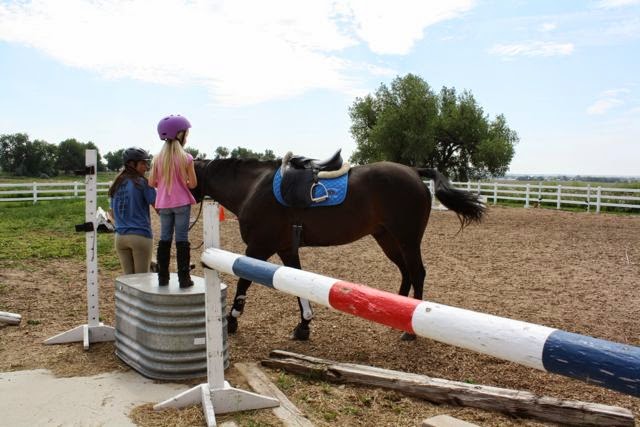 You can see how big he is as Lucy attempts to mount him. 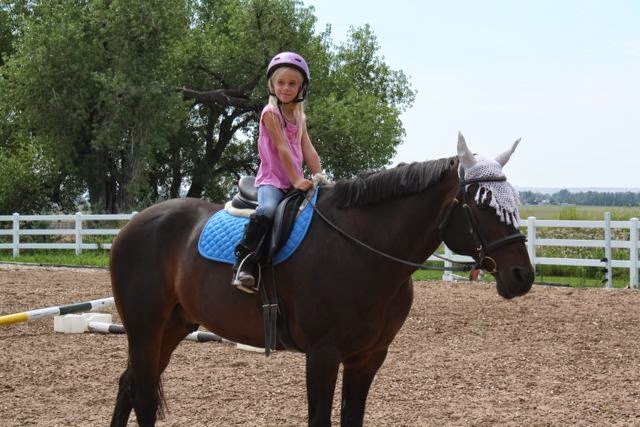 He is very gentle. 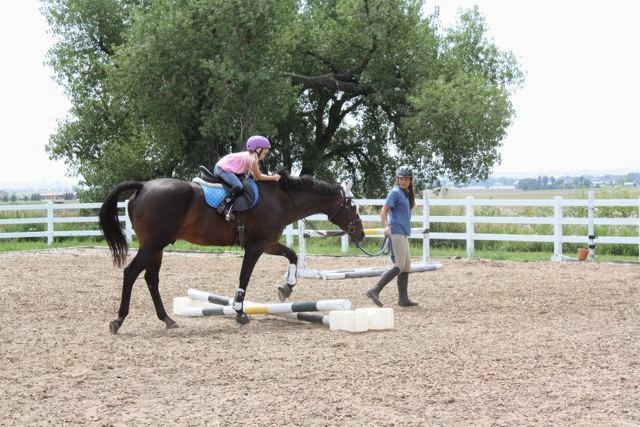 At 13 Mara is an accomplished horse woman and has done so well teaching the girls. Here Lucy takes her first jump. 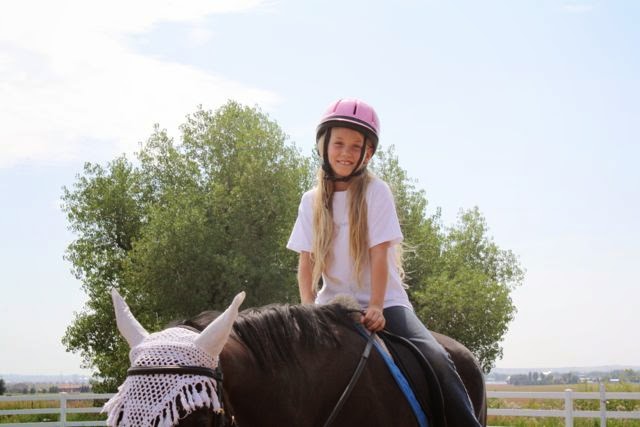 The girls were thrilled to get ride Bear. They were so relaxed I think because Bear was relaxed. Ellie looks right at home on the big guy. 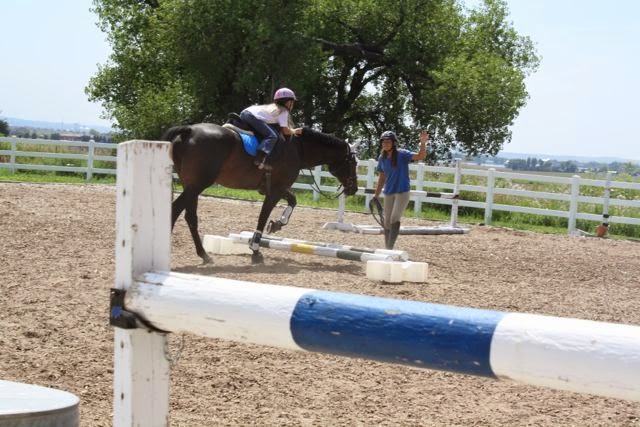 Miss Ellie takes her first jump. By the end of her session, Ellie was riding Bear alone and taking the jump without Mara's assistance. 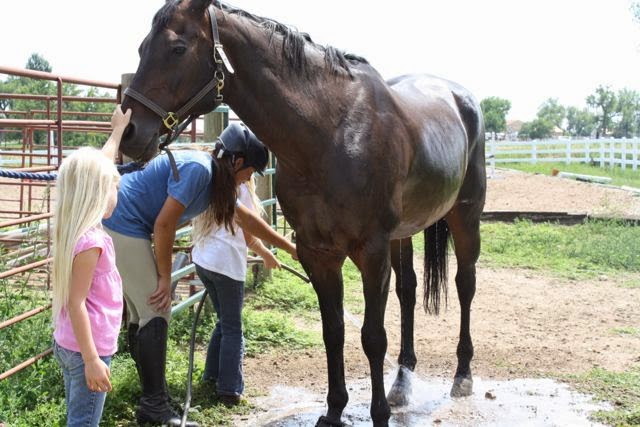 A nice little shower after a heavy work out. 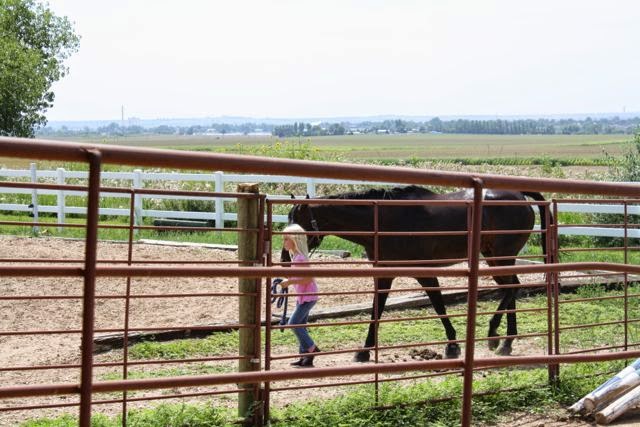 Now look at this little girl and a big horse. Love this photo. And I have to comment on the beautiful landscape behind the barn, the corn fields of northern Colorado. 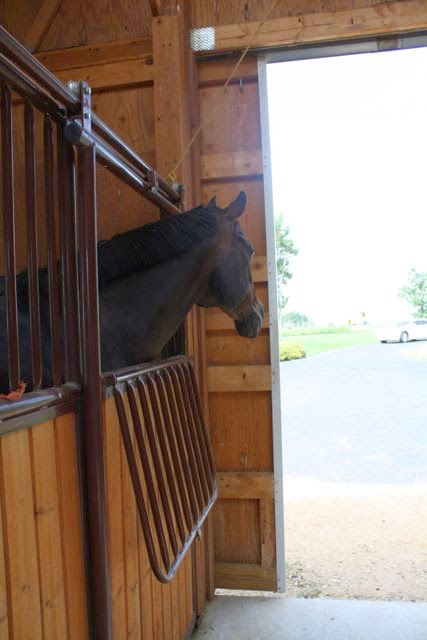 A day spend with horses and kids is the best day.

And that's why weeds are out of control around here.

Better get to work.

Hope you all have a fabulous week end.

(Gee, I feel better already. Nothing like good friends to listen to a rant to get it out of one's system.)

Thanks for listening to me today.

Happy New Year 2020 at one time seemed so far off in the distant future, but here we are full of hope and enthusiasm for the new year. I... 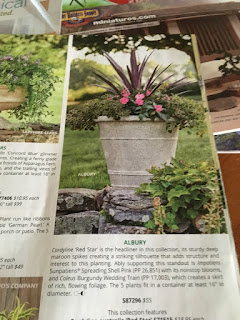