Hodge Podge (In No Certain Order)

We had a very quiet week, which was much appreciated. With spring-like weather, we were tempted to get out into the garden to do something, anything. Instead as I tromped around inspecting what garden was clear of snow, I found mud, so much mud that I stayed on the pavement or the lawn. It will be sometime before we can actually do anything in the gardens. While Mother Nature teased us with sunshine hinting that Spring was just around the corner, she has smacked us back to reality with more snow and cold on the way. Ah, whatever. It's winter. The calendar says so.

The Swans are Back

Fridays are my day to tutor at the university writing center. I see all sorts of clients with a variety of writing projects and writing concerns, all the way from the freshman research paper to the graduate student's thesis project. I love working one-on-one with each student. No grading. No planning. No getting up early. Right afterwards, I headed out west to the medical clinic for the bi-annual mammogram. Passed with flying colors. As I was so far out west, I drove the back road home. These country roads, used to be less traveled; now they are becoming more heavily used.  Road 59 has been widened and paved, but thankfully the scenery hasn't changed much-- gas rig here and there, a dumpy little shack house torn down since my last trip, a traffic light added, but the corn fields and the Poudre River remain unchanged.

As I approached the river bridge, I saw a car parked roadside at the river and as I passed I saw them, the swans, a pair. My heart fluttered. I had my iPhone. I could get photo, maybe. I didn't because there really wasn't a place to stop and turn around and traffic traveled in both lanes. I'd drive down the next morning with the Canon to get proper photos. 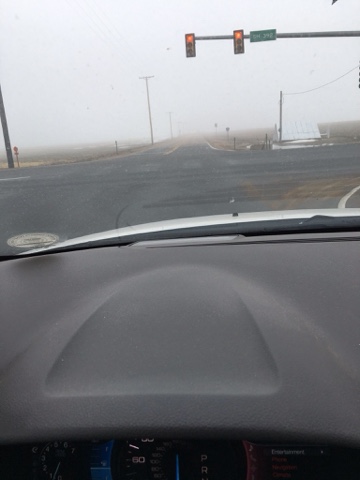 We got up Saturday morning to fog. We never get fog here. Well, seldom. I love the foggy countryside. It wasn't that pea soupy fog that is dangerous to drive, so I thought I'd take that short drive down to the river to see the swans. This is my only photo of the fog. I didn't even stop at the river because the swans could have been any where along the river. I will be taking this back road again and again, hoping to get lucky to see the pair of swans--and we just might take Boone for a walk along the river walking trail in hopes of seeing the swans again.

Yes, seeing swans in the wild in Northern Colorado is a big deal. They migrate here with the Canada geese. A few years ago they were on the lake in the middle of the city from early fall through April. It looks like this pair has found the peaceful river more secluded and private for their winter vacation.  The city lake is well-frozen, so the river is a nice winter get away.  I am on a mission now to photograph the swans.

When the door bell rang after dark Saturday night I wondered who would be coming by so late. 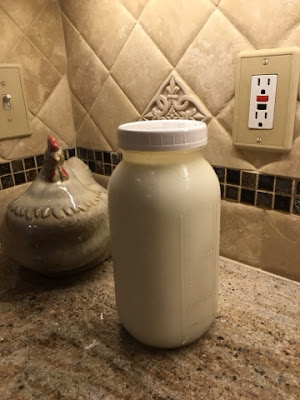 The neighbor, dropped by a gift: fresh milk, as in fresh from the cow. She and her husband care for a brood of 5 kids, 4 boys and a girl, all under 10 and invested in a couple of milk cows to help feed the family.  She comes from Indiana where she grew up on a dairy. She is now milking her young Holstein heifer, which is giving more milk than she can use.  We gifted her eggs.  A fair trade, don't you think? The federal government has put in place such strict laws controlling the sale of raw milk, so whiled she has a pasteurizer she doesn't sell her milk. A nice gift, don't you think I am trying to decide what I will make. I will skim the cream off the top and make butter, perhaps. A thick, rich, creamy custard maybe?

The Milk Maiden may have had another motive in offering her bovine gift, for she asked the Head Gardener if he would be her back-up milker should they decide to take some time off for a short get-way, knowing full well that the HG grew up on a dairy, too. He knows cows. His parents milked a small herd of Jersey cows for years. He knows the routine, too. 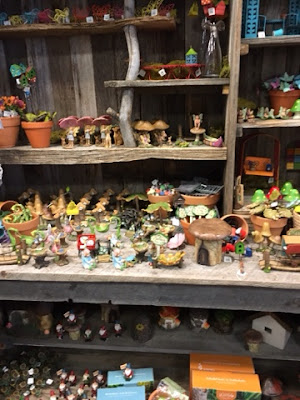 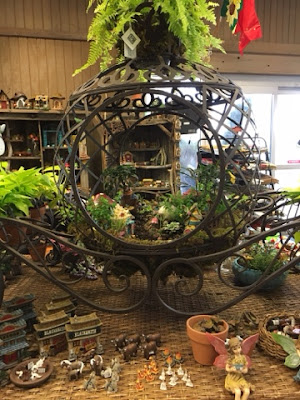 My friend's birthday is today. Happy Birthday, Sherry. We met her and her husband for lunch yesterday. They live  in Northeastern  Colorado and were in Ft. Collins for an affair at Colorado State University Saturday night, so we had lunch and wandered through Cosco while Sherry shopped. Before lunch the HG and I stopped at the local garden center to get her a gift card. I had to take photos of the fair garden display that they have set up. (Hey, this week I have been desperate for photos for the blog). Bath Nursery has probably the best fairy garden supplies a fairy gardener could want. I love the iron carriage.
Valentine Sweetie 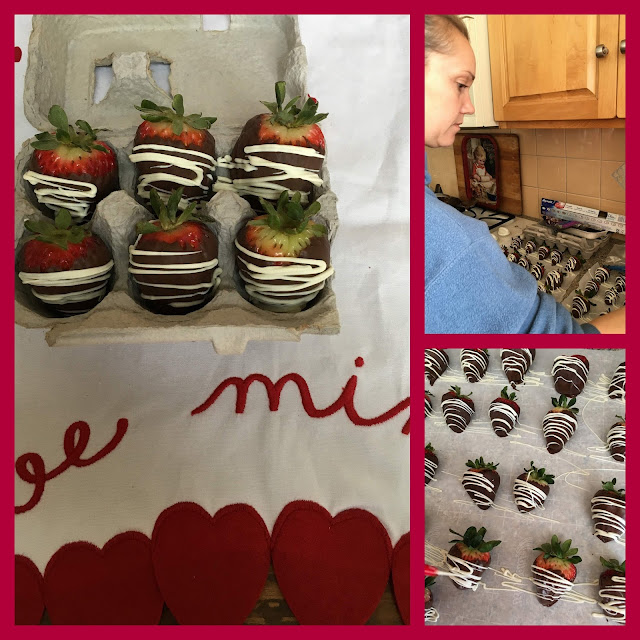 After hanging out with our friends, we paid a visit to Jen and the girls. She was busy making hand dipped strawberries. The girls were wired. Too much chocolate. Jen graciously shared her strawberries with us. I'll have one for lunch. Thank you, dear. 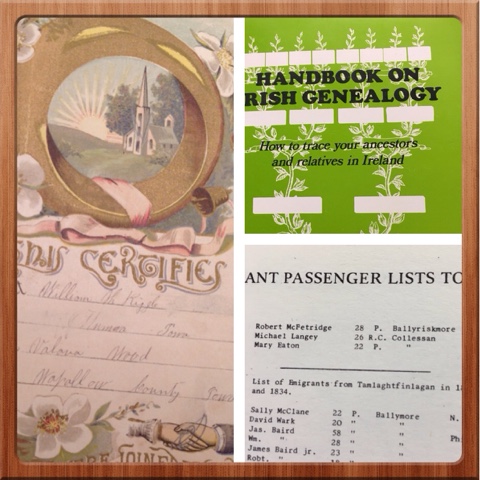 My genealogy search for my Irish roots has hit quite a snag. The mosaic tells the story, or part of it. The photo in the left is an image of my great grandmother's Bible. This page documents her marriage to William Riggle. The Riggles are my German ancestry on my Grandmother Eaton's side. My grandfather's great grandparents were born in Ireland and that is where I have hit a snag. Without going into all the details, I spent time in the Ft. Collins library with this little book that lists the Irish emigrants who emigrated between 1833-4 to ether Quebec or New York City. I am now searching these passenger lists to find my great great grandparents. I have found two Mary Eatons who traveled at the same time, same age. So I have questions:  Did my great, great grandmother travel alone or come with her husband Michael. On this list, this Mary landed in New York City. Is Eaton her married name or her maiden name? So while I know that Mary Eaton (two, in fact) emigrated, I have to find Michael. I am waiting for another document from the Denver Public Library that lists a Mary Eaton who landed in Quebec, Candada. I may have to resign myself that I may never know the answers.

Let me ask you, does anyone know the township in Ireland listed here: Collessan? When I Google it, I find only a surname. This Mary landed in New York without Michale.

I seldom buy greeting cards anymore, especially birthday cards. Sherry and I are both scapbookers, so of course, a handmade card is appropriate.

I was inspired by the Great Horned Owl that visits the Garden Spot and lives somewhere close by. I heard him/her late last night as I worked on the dollhouse down in the basement. We often hear the owls at night. Last night he was very close. The HG came down to tell me that the owl was in the big pine tree out by the play set. I went out on the patio to hear him. HOOOOO HOOOOOO, he said, then I saw him wing his way across the yard in the dark of night. A Harry Potter moment for sure. His winged form showed white in the dim light cast from the barnyard light as he flew across the yard into the darkness. 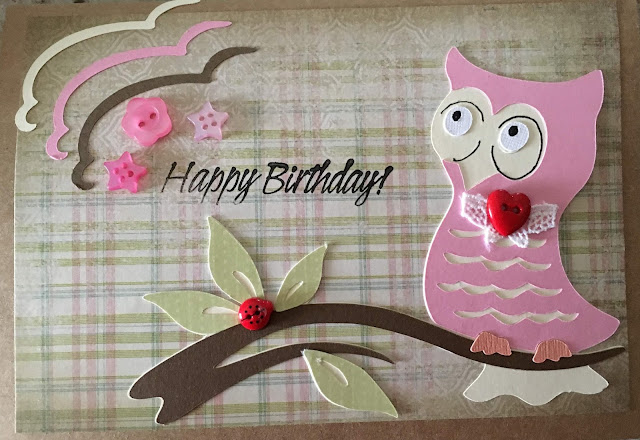 We made plans to build a nesting box for the pair. Wouldn't it be exciting to have a pair of Great Horned Owls nest here at the Garden Spot? The HG will see what he can do to attract them. They are often in the trees along the alley at the south edge of town just across our neighbor's pasture. I am sure that he was looking for a late night snack. Mo the cat was safely tucked in bed in the garage.

And that is the week that was. I hope you had a wonderful week and a sweet Valentine's Day celebration. We (the collective Bronco fans) are still basking in the glow of the Super Bowl win, as silly it may sound. I'll get around to removing my Bronco banner this week. I'm tired of it, too.

Thanks so much for stopping by. I always enjoy visiting you, too.

Be sure to check out Mosaic Monday over at Lavender Cottage. I'll see you there.
at February 15, 2016 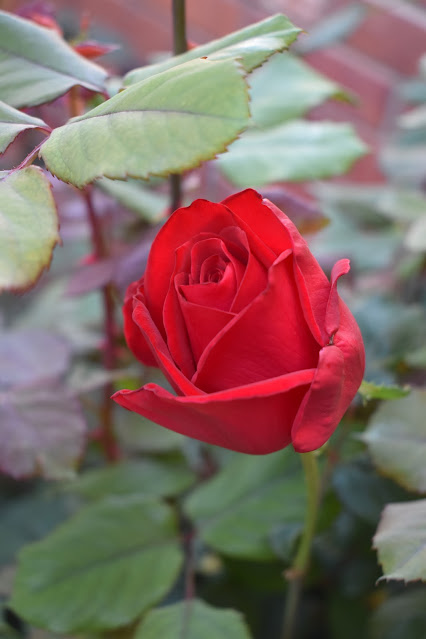