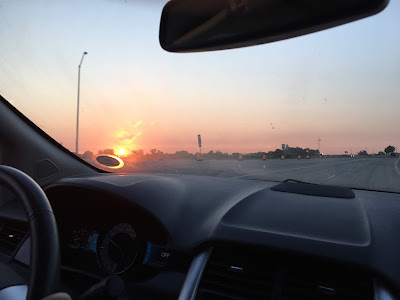 We left just a bit before dawn. A smokey haze hung heavy in the air. As we reached the the Platte River, a light fog drifted over the river's corridor. Soon the sun began to lift itself above the tree line. All summer the sun has glowed red, filtered through a haze of smoke that seems to cover most of the western states as forest fires continue their rage, some having burned all summer. Our journey will take up 6 1/2 hours, but it will be worth it. 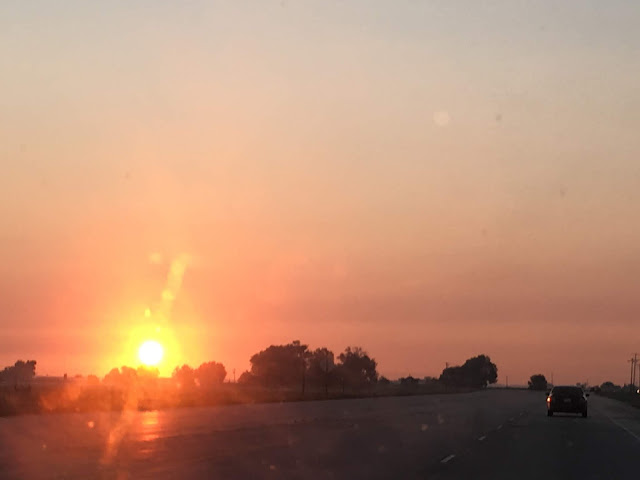 We drove into the sun until we crossed the border into Kansas where the vast grasslands where cattle grazed gradually turned to farm fields. We crossed over a corner of Nebraska, but who would know other wise unless they were paying attention to road signs. 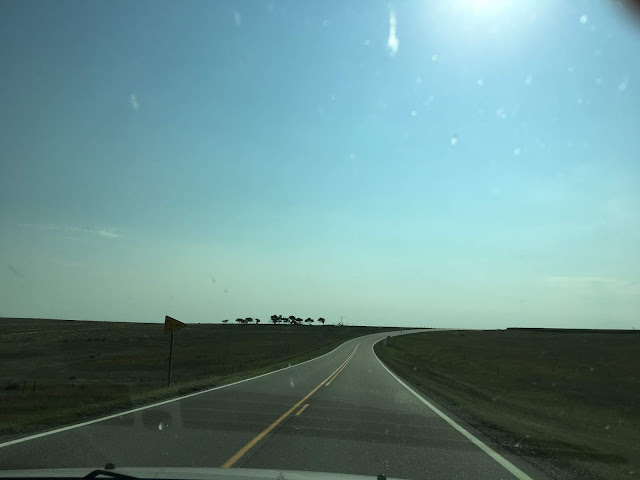 We drove along the northern border of Kansas and Nebraska, passing through little villages and small towns. I liked Kansas. The landscape was beautiful and the traffic nonexistent, unlike the Front Range of Colorado that has become so over populated and congested that a move to Kansas was beginning to look pretty interesting.

We drove, the anticipation building as the miles passed. We were headed to a very small village, Kensington, Kansas, population 469 (2010). We were looking for Outback Kennels. As we past through Phillipsburg, a friend's hometown, I texted her to tell her that were driving through her town and we made a lunch date for this week. 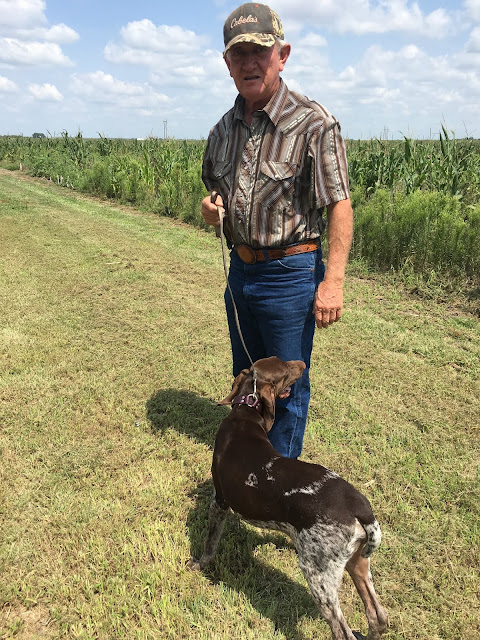 We still are not recovered from so suddenly losing Boone, but the house is empty and quiet. The Head Gardner began his Internet search for another dog, not at all ready for another dog. I said let's wait until after the first of the year. Let's get a puppy. We visited a breeder on the western slope when we over for the wedding. Her pups were adorable, but he wasn't ready. He studied the rescues and found dogs that he thought would be a good dog to have, but he wasn't ready for another dog. He found one that he was interested in and put in his application despite knowing that we are not a candidate for a rescue because we don't have a fenced yard then he found this pup in Kansas at breeding kennel selling very expensive dogs. He took several days to get up enough nerve to text the breeder to find out about an older pup on their website. He was born April 1, so he is nearly five months old. The kennel specializes in gun dogs, bird dogs, hunting dogs. High priced dogs. But not this one. The breeder had decided that this pup, a shy little guy, wouldn't make a good hunter so he was a bargain and no one wanted him. 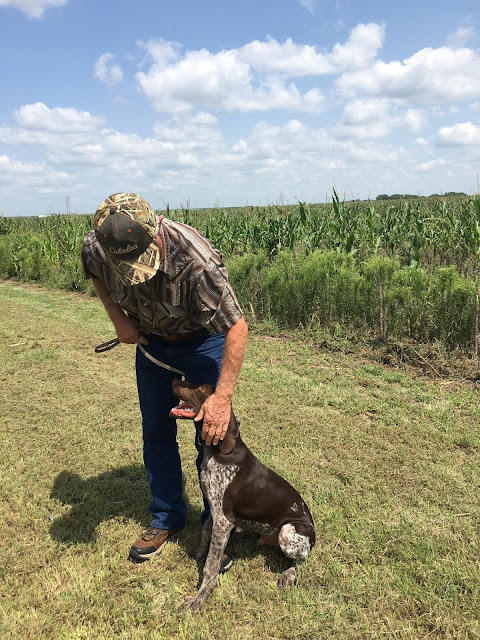 But someone did. We've named him Brody: a good Irish name for a German dog, a German Short Haired Pointer.

He is timid and everything is new to him. He'd never been in crate or a car or a house. So we paid the man and loaded him in the crate in the back of my little SUV and headed across Kansas toward home. 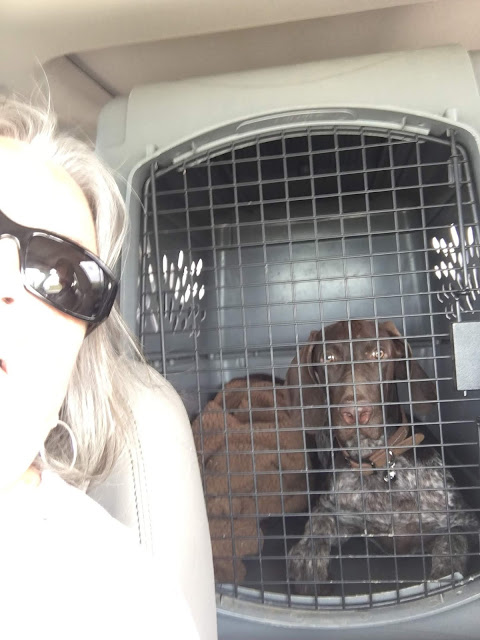 He slept most of the way until I tuned the car radio to my iPhone to listen to my tunes. He started to fuss and bark and we realized that he had never heard music. While his kennel was clean, it was cement and chain link. He was timid and wouldn't come to the fence to greet us. He's still shy but he is coming around. 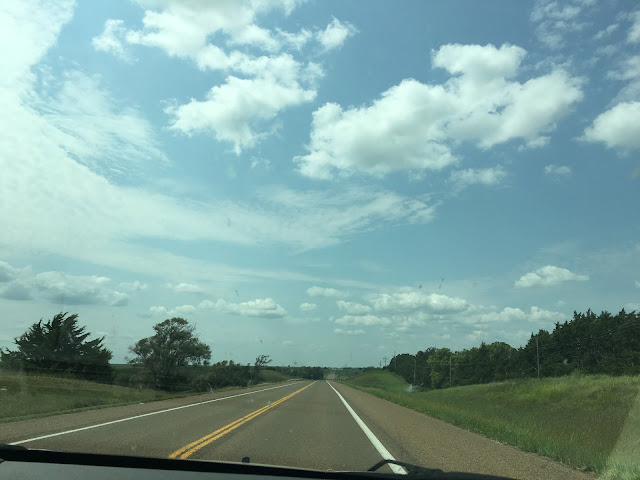 This part of Kansas is beautiful with woods and farm fields--and no traffic. 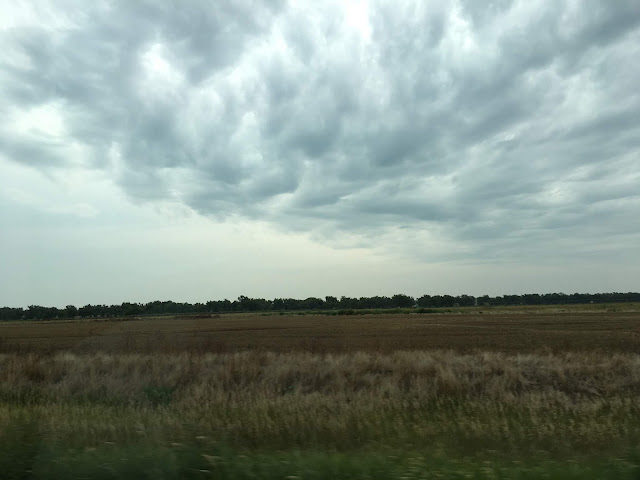 We got lucky. No bad weather, though we could see the storm clouds gathering. 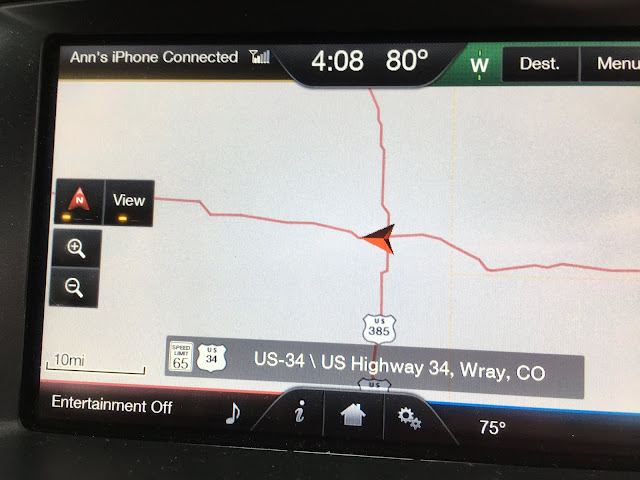 Look closely and you will the thin yellow line that marks the states' borders. Still we are three hours from home. 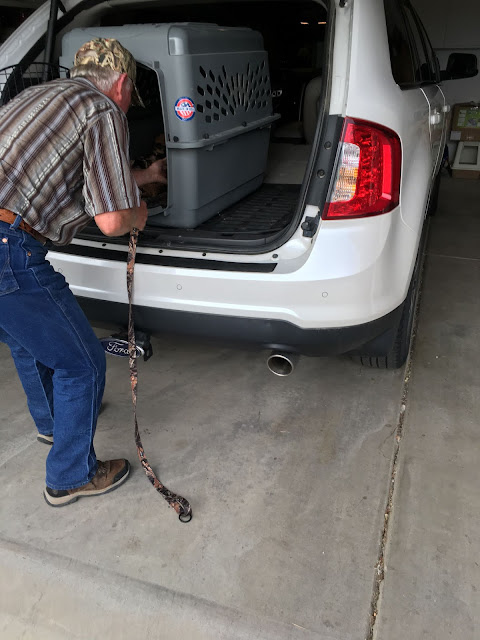 The HG has to coax Brody out of his crate. 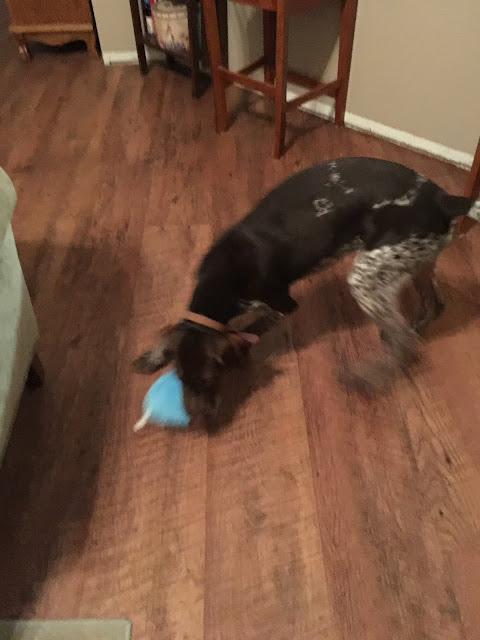 He gets his first toy. 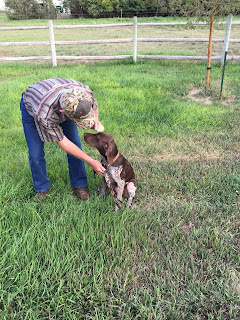 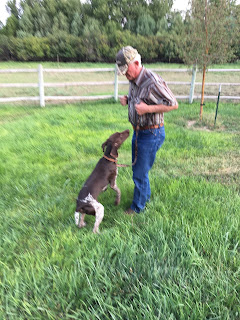 I didn't have the camera when he took his first trip outside. I wish I had one when he met the horses for the first time. The boys were out grazing and when saw the new dog, they came to the fence to meet him. He barked and growled, trying to sound tough, but more scared. The horses were used to Boone running around the pasture, so they were curious to see the new dog, but he wasn't very nice to them. 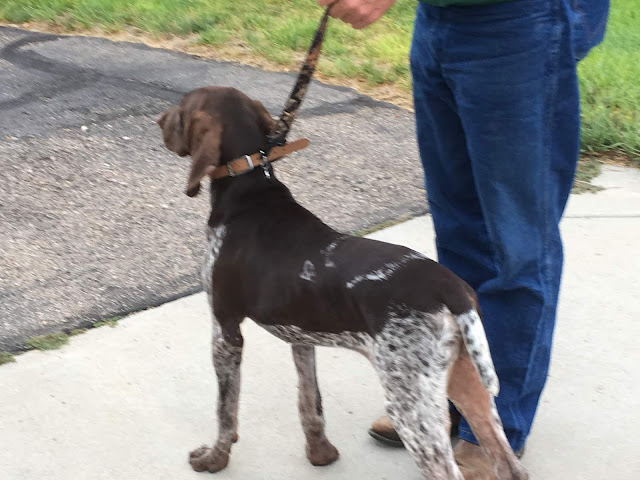 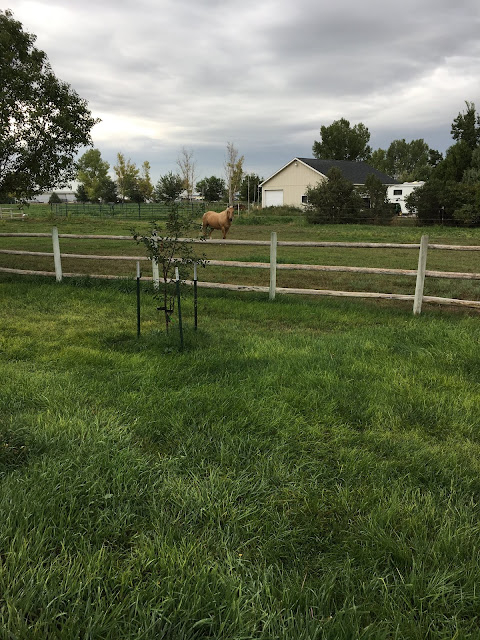 Sundance sees the new puppy in the driveway and comes to say 'hi' again. 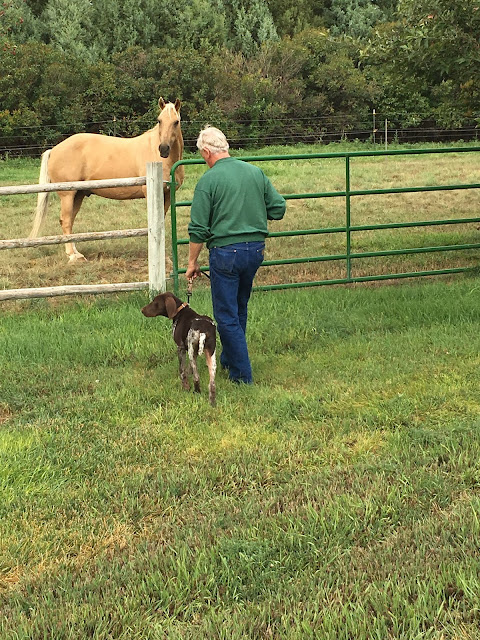 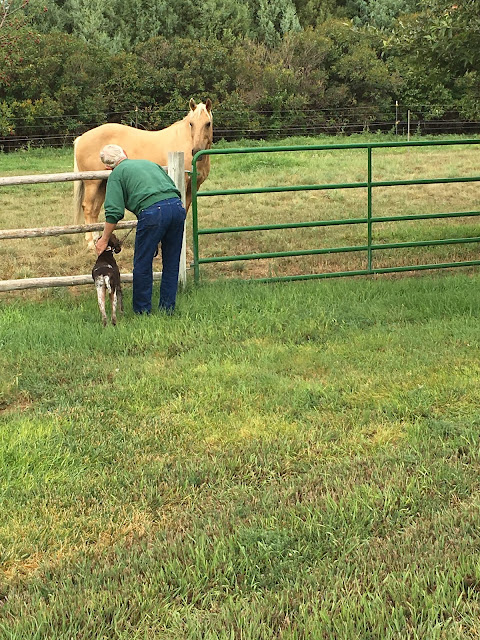 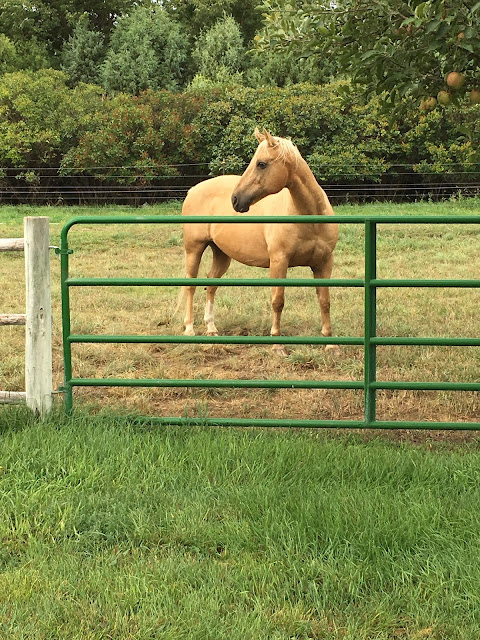 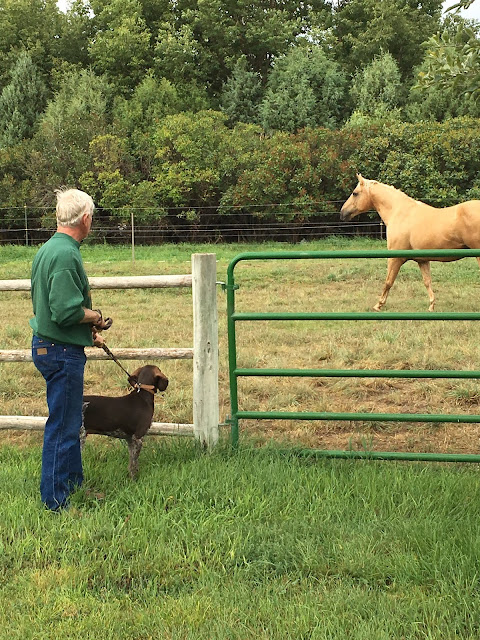 Sundance has had enough. He's not really impressed with the little guy that barks and growls. 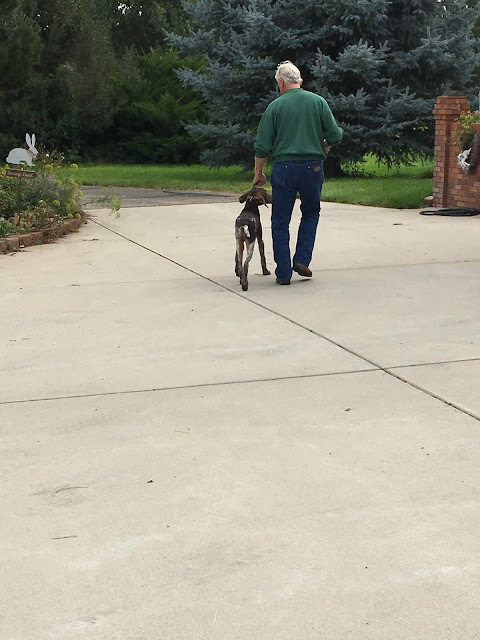 Still, sad with the loss of Boone, the Head Gardner has a new little buddy. He is sweet and shy, but he learning so fast. He is going to be an easy little pup to train.

I'm joining Mosaic Monday with this windmill mosaic. I shared photos last week of our trip to the grasslands, but I hadn't played with a app that I downloaded to my lap top call Smart Photo Editor Std. You can download the trial version and play around with it, but you can't save your photo unless you buy the full version. It is a bit pricey, $49.00 but it has hundreds of effects that you can apply to your photos. 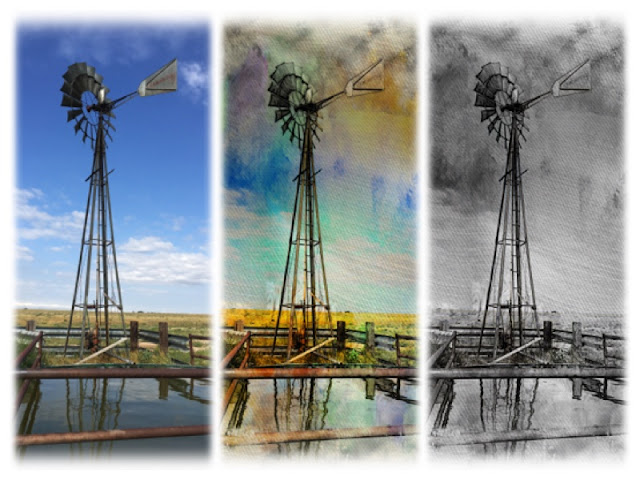 I don't know which effect I like the best: the water color on canvas or the  pencil back and white? 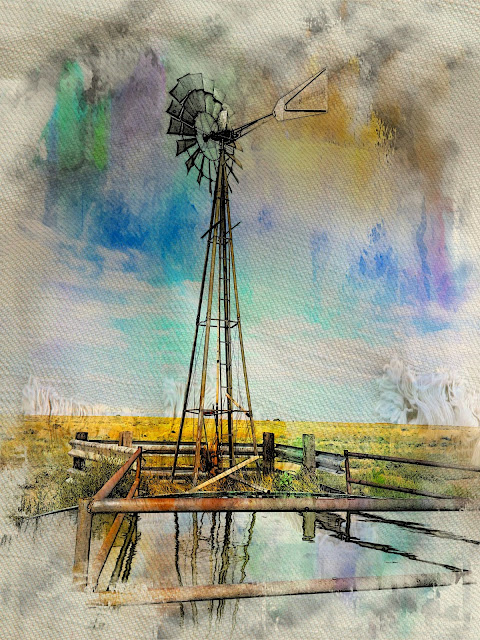 I think I'd frame the colored one. 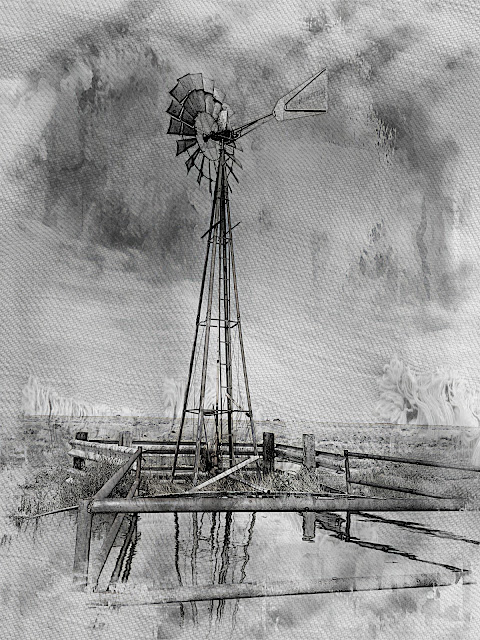 The app is easy to use, had a lot of interesting photo editing features that take the guess work out of Photoshop, which I have never really been able to master. I've had instruction on Photoshop, but it's one of those things that if you don't use it you lose it, so I am not very good with it. I like this program and will used it, I think. What do you think?

I am so glad that you stopped by. See you over at Maggie's for Mosaic Monday.