I have a lot to share today, so pour yourself another cup of tea, coffee, water--your choice. Last time I wrote about buying peaches in Palisade, CO, the peach capital of--well, I'd like to say THE PEACH CAPITAL, but I hear that Georgia peaches are pretty fine too, so I'll limit the fame to Colorado, with Clark Farms having the best. 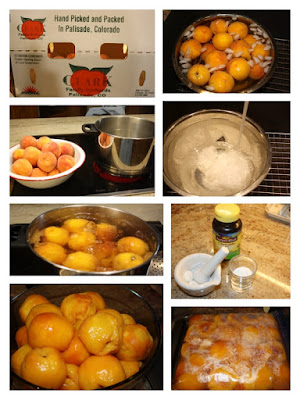 So you all know the process: blanch, ice bath, peel, slice, and for me bag to freeze. I just was not up canning. To keep the peaches from turning brown, instead of making a special trip to the store to buy the ascorbic acid, I followed the suggestion of a web site: good old crushed Vitamin C tablets. They should work??? I'll let you know. I even did a second box a few days later, a box that was meant for Heather, but we wouldn't be seeing her before the peaches went bad I froze them, too. There weren't that many since we had been nipping one them. Should I share? Well, of course I will.


Let's Go to the Fair

I suppose most everyone has heard of  4-H, a youth organization that promotes leadership, responsibility, and learning for children between the ages of 8-18. Local clubs are partnered with a state university that provides the support for the groups. Briefly the 4 H's stand for these qualities: Head for clear thinking; Heart for greater loyalty; Hands for larger service; Health to better living. Click here to read more about what each H stands for.


A year's worth of hard work and training culminated for the girls at the 4-H Fair.  Mom hauled Mariah to the fairgrounds, while dad towed the camp trailer so that the girls would have place to stay for the week. The horses had to be there August 29th and were released August 2nd. Then on Friday Ellie had to take her rabbits to show this past weekend. The events for the horses began at 8 AM Monday morning and I was there, excited to see how the girls would do.

Both girls were entered in the Walk Trot level as very novice riders. The girls worked all year with their riding trainer who is also a 4-H leader and first grade teacher at their school. Now it is time to see how all of their training and hard work paid off. 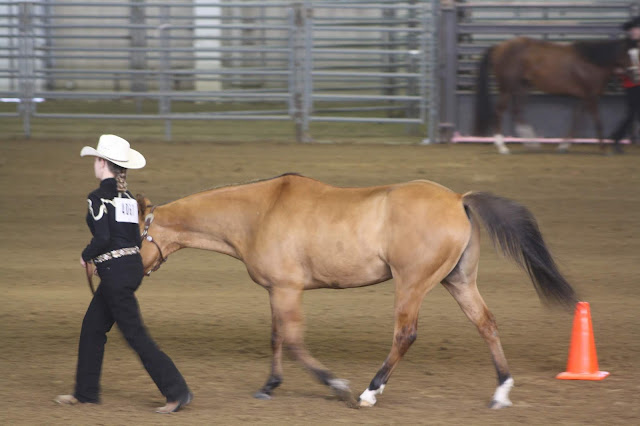 Ellie leased a horse since her old mare is not able to compete, so this is Dunny, a small quarter horse who has been doing this 4-H competition for 14 years. I lost track of how the girls placed, but Elinore placed first in all of her events--except for one, I think--. Her first event was showmanship where the horsewoman leads the horse through a pattern to show how well it behaves and performs the pattern. She took first place. 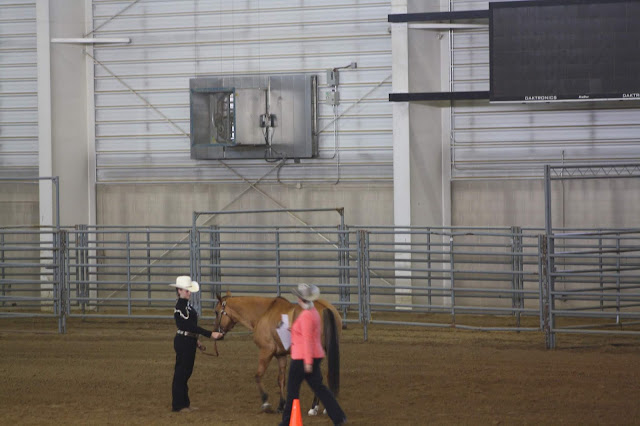 Showmanship is a very formal, requiring the handler to stand straight, face the judge, and mange the horse. For Dunny, he must be quite bored, but he was perfect. 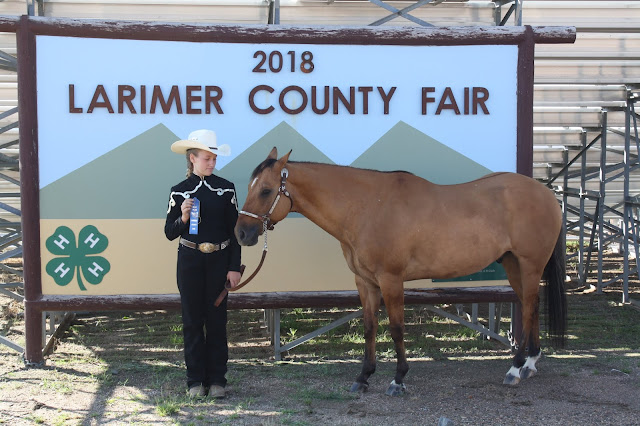 After the event, the girls went outside for the formal photographs. 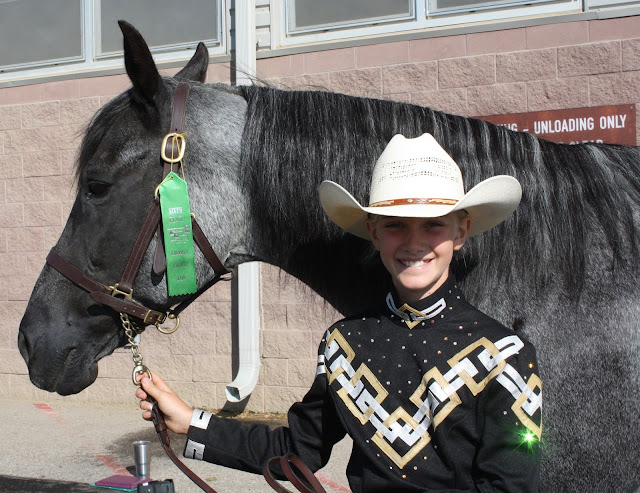 I didn't get good photos of Lucy's showmanship class because the lighting the arena was so poor. She took sixth. I wish you could see her long blond hair all rolled up in a bun at the back of her head beneath her hat with a black net over it. She looked very glamorous. 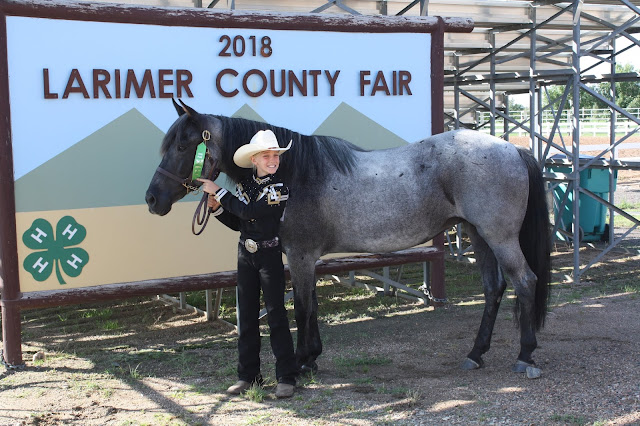 Lucy placed lower in a couple of her events because of mistakes that she made in the patterns: standing on the wrong side of the cone, for example, in the showmanship class. Hers really is the success story because she has had this little mustang mare for less than a year and this is the first time Mariah has competed. She spent all of her life in the mountains with her girl riding her on mountain trails. She did everything that Lucy asked her to do. She is an amazing little horse. At 16 she has a whole new life. Her former owner left work one morning to come see her perform. So while Lucy didn't show as well, she had a personal victory in accomplishing so much: learning how to ride while learning how to show. 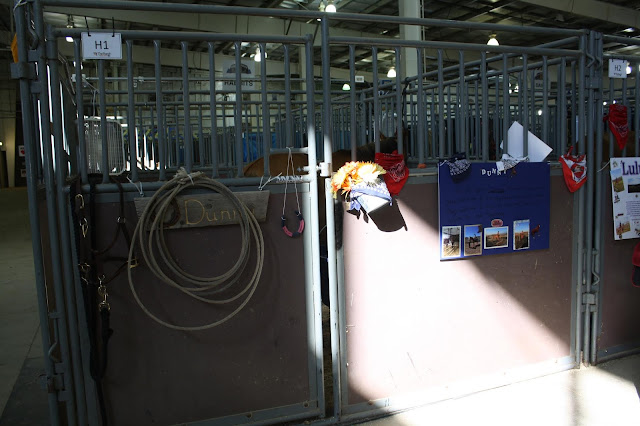 The Larimer County fair grounds are fairly new and state of the art. The stalls are spacious and the kids have to keep them and the aisles clean.This is Dunny's stall. The girls made posters telling a little bit about their horse for the public visitors. 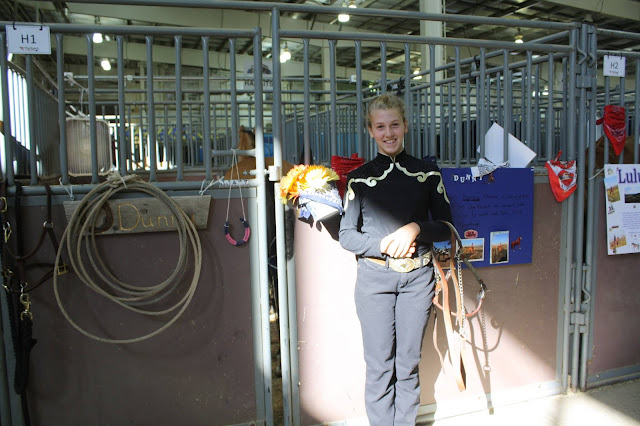 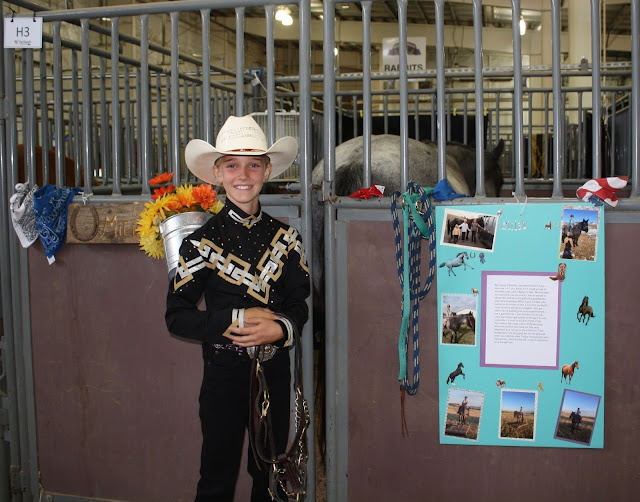 Lucy with Mariah. At this moment in time, Lucy is 9. She turned 10 after fair. 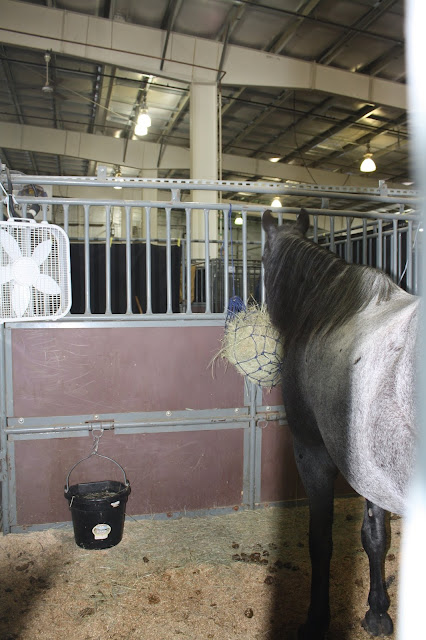 Mariah getting a little snack. 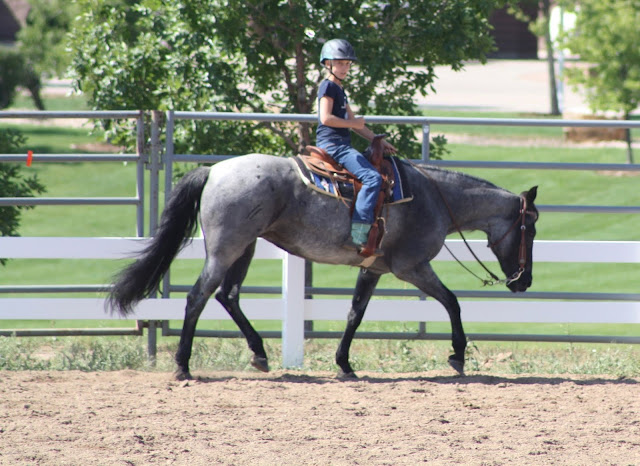 Next event: Horsemanship. Again photos were pretty hard to take in the arena, but outside the girls are in the practice arena practicing their horsemanship. 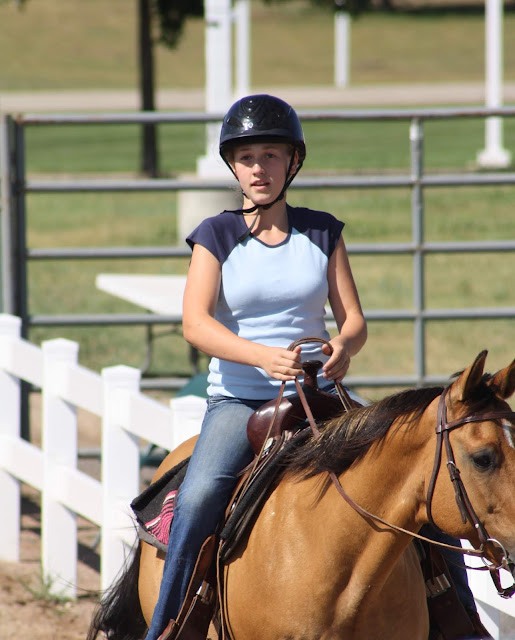 Ellie has been riding Dunny in training, so they know each other. She looks confident. 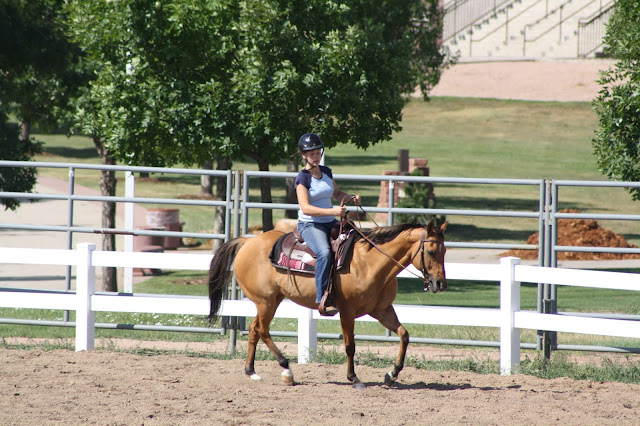 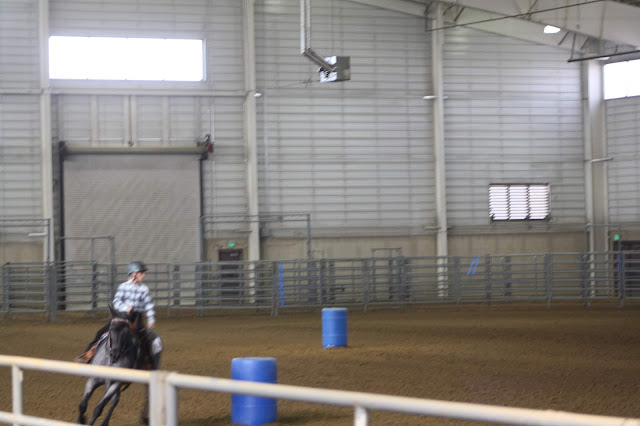 Wednesday was fun day where the kid competed in gymkhana events, all timed and for the girls performed at a trot: barrel racing, key hole, and pole bending. Here, Lucy is running the barrels. So the idea is to do a clover leave pattern racing around each barrel. Lucy looks like she is going pretty fast, but she actually trotting. 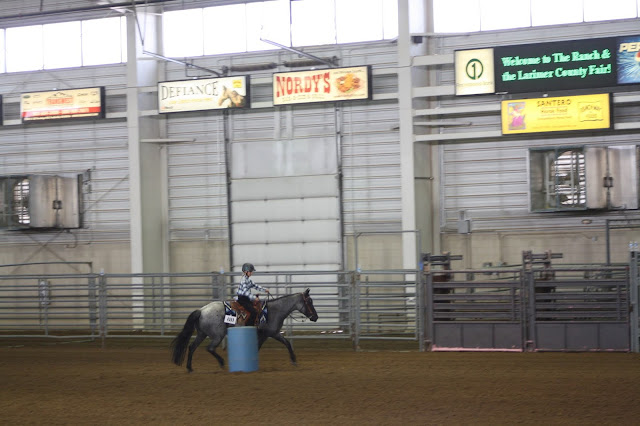 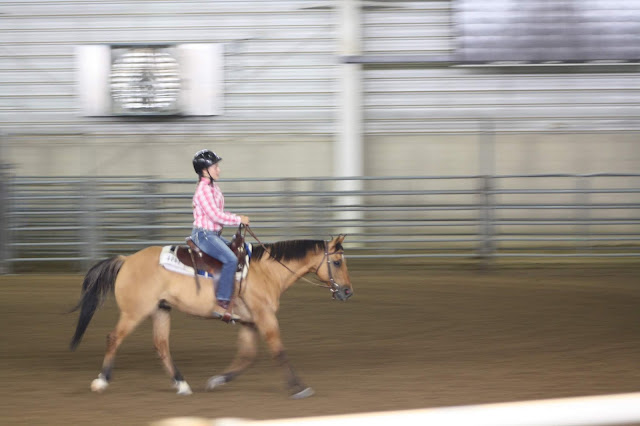 Ellie headed at a trot to the finish line. Breaking into a lope disqualifies the rider. 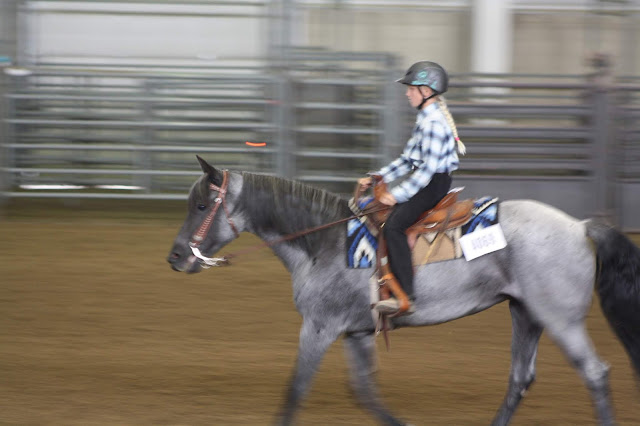 I like this photo because the horse's head is the only thing in focus. I used the action feature on the Canon because it offered the best exposure. 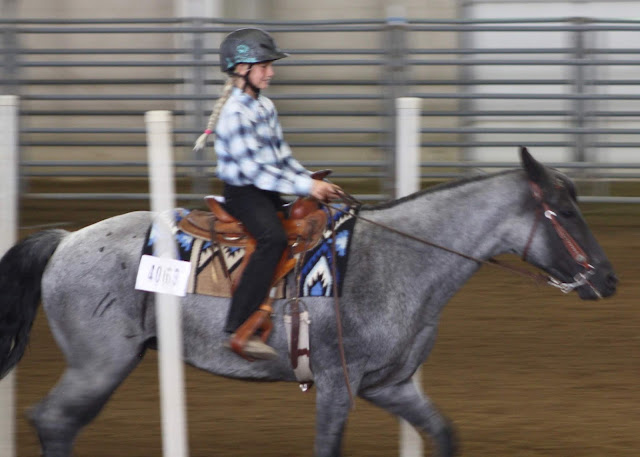 Keyhole, another timed event: rider rides forward between four poles, has to make a sharp turn without stepping on or crossing a chalk line at the end of the four poles. 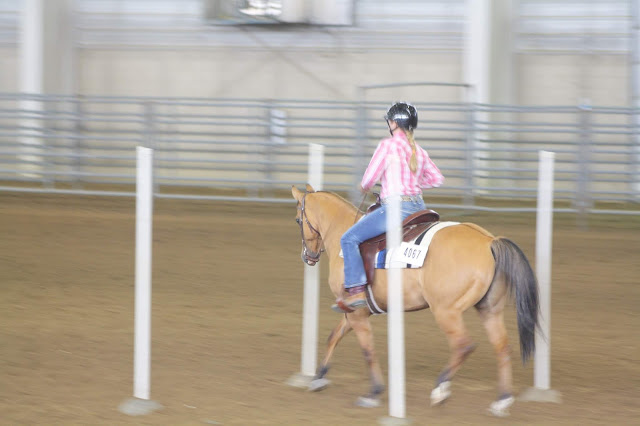 Here you can see the poles better.

Next is pole bending. The ride weaves the horse between six poles. The fastest time wines. Lucy took second place.

With the horse events over, we returned yesterday to the fair grounds to watch Elinore in rabbit showmanship. I think she told me tonight that she took first. I had my doubts as I watched her. The poor little bunny's little legs shook like crazy when she was on her back. This is a new rabbit that Ellie bought this spring at the rabbit show in Cheyenne. She turned out to be a champion because she won best of show, grand champion. I was curious about the judge, that's why I used him in a mosaic. I like to watch his expressions. 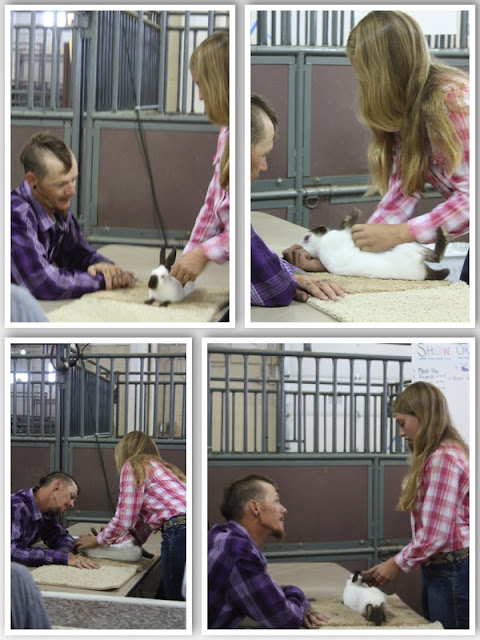 With the awards ceremony happening as I write, Jen sent this photo. Ellie's little Reign took grand champion Best of Show in her breed and Ellie took first in her division for showmanship. 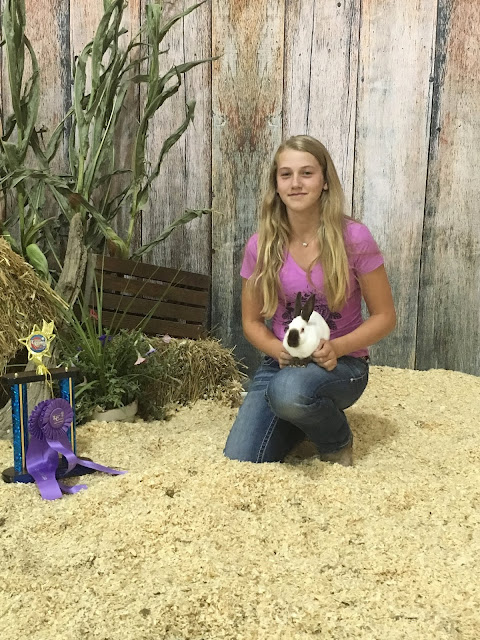 Ellie's success didn't end with he 4-H fair, but she also entered the photography competition in the county fair. She took a photo of her mare, Honey and won a second place. Yes, we were really surprised because the competition is so tough. 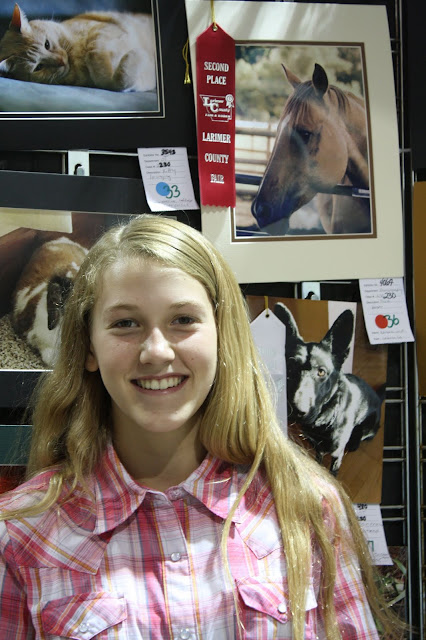 To finish up, Lucy's leather project, a little coin purse won a blue ribbon, too.

The girls are already planning on what they are going to be doing next year. Hope, mom can keep up with them.

And this last photo sums up Fair. The kids are to take the initiative to keep the horse barn clean so that visitors enjoy their tour as they visit the horses. The 4-H'ers are to be on hand to keep the barn clean and to visit with the public, showing their horses and equipment and answering questions.

So as I left Wednesday after the last event, I turned to take one last look to see Lucy sweeping. 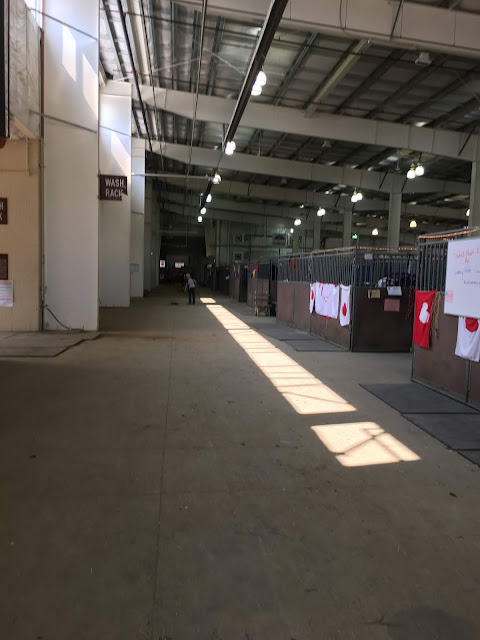 I'll be linking with Maggie at Normandy Life for Mosaic Monday. I hope you get as much of a kick out of the Rabbit Mosaic as I did. I am also going to join Susannah at The August Break 2018 to take a photo everyday.  She provides a list of suggested topics and I am choosing "Younger Me." It's a simple concept because any one of these photos certainly reminds me of a younger me back in the days when I spent my life with a horse, my friend, my companion, my spirit.

I've updated the dollhouse blog with my clock project. Take time to see what's ticking over there.

Thanks for stopping by.